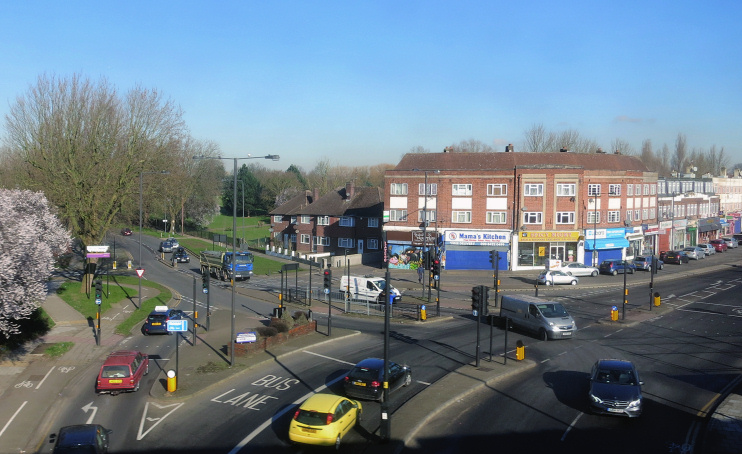 South Harrow and Roxeth station opened here in 1926 and the station gained its present name in 1929, the same year in which a neigh­bouring farm was converted into Northolt Park race­course – the national centre for the new sport of pony racing. The sport was cheaper to run than horseracing and the track’s excellent facil­i­ties attracted large crowds over the next decade.

There was little racing after the outbreak of the Second World War and in 1940 the govern­ment requi­si­tioned the site to intern Italian prisoners, later converting it to an army camp.

Attempts to restart pony racing after the war were thwarted by Ealing council’s deter­mi­na­tion to use the land to ease its housing shortage. The council compul­so­rily purchased the site for £250,000, although the start of building was delayed for several years by the tardy with­drawal of the military.

At the same time Harrow council laid claim to part of the site for its own council-house building programme. The first 64 houses were built in late 1951 in the north-west of the site and the grand­stand was demol­ished in 1955.

Ealing council even­tu­ally built around 1,200 homes on the Race­course estate and Harrow council contributed another 200. Blocks of flats were added later on Newmarket Avenue. Apart from the street names (mostly famous British race­courses), little evidence of the racetrack remains here. One of the stands was disman­tled and moved to Brands Hatch motor-racing circuit.

The film and music hall star George Formby rode at Northolt Park in 1938 and returned the following year to make the Ealing Studios film Come On George, performing all his own stunts.

* The picture of Alexandra Avenue and Northolt Road at the top of this page is adapted from an original photograph copyright Des Blenkinsopp, at Geograph Britain and Ireland, made available under the Attribution-ShareAlike 2.0 Generic Licence. Any subsequent reuse is hereby freely permitted under the terms of that licence.