A large and unexciting set of housing estates, plus a famous aerodrome (which is really in South Ruislip) and an award-winning new park

This was formerly Northall (rendered in Domesday Book as Northala), the northern coun­ter­part to Southall. A settle­ment has existed here since the eighth century, orig­i­nally on higher ground to the north-east of the church.

The present St Mary’s church and a manor house were built in a shallow depres­sion in the late 13th century and a village then began to take shape around the green. The manor house was thrice pulled down and twice rebuilt in the 14th century, and gained a moat, but was left in ruins after its last owner was hanged for treason.

By 1500 there were four outlying hamlets in the parish, of which only Wood End and West End retain vague iden­ti­ties today. From around 1700, when the village was first being called Northolt rather than Northall, the open arable fields were increas­ingly turned over to pasture and hay produc­tion for London’s horses. The village remained quiet for another two centuries, mainly because of the poor state of the roads and the inad­e­quate water supply.

A railway halt opened at Northolt in 1907, but this at first had little effect on the village – other than lending its name to a new aerodrome for the Royal Flying Corps, which opened to the west of the parish in 1915.

Between the wars landowners began to sell their farms with increasing rapidity, espe­cially after the opening of a second local station in 1926 – which was called South Harrow and Roxeth for the first three years of its existence, and then renamed Northolt Park – and the coming of the Western Avenue and other arterial roads in the mid-1930s.

During the Battle of Britain, squadrons based at RAF Northolt shot down at least 148 enemy aircraft. Because of the aero­drome’s presence, the vicinity was heavily bombed by the Luftwaffe.

Northolt station was rebuilt for the arrival of the Central line in 1948 and the district became the focus of Ealing council’s postwar house­building programme. This included exper­i­mental projects by the Ministry of Works, using mass-produced compo­nents like steel sheeting so that prop­er­ties could be built rapidly. In the two decades after the Second World War the council built almost 3,500 homes in the area, more than half its total for the whole borough.

In 1958 Moat Farm was replaced by a privately built estate, and several infilling projects further increased the housing density later in the 20th century with a series of closes. Belvue Park and the old village centre retain some rural elements, and the moated site of the manor house is a scheduled ancient monument. 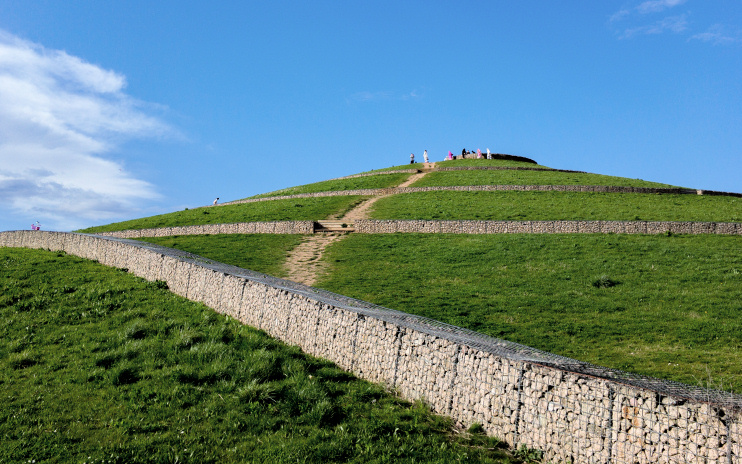 Northolt and Greenford country park is dominated by the four conical mounds (visible but not labelled on the satellite map below) of Northala Fields, which were made from 65,000 lorry loads of rubble from the original Wembley stadium and spoil from sites like the Westfield London shopping mall and Heathrow Terminal 5. As well as providing a distinc­tive visual feature, the mounds shield the park from the noise (and sight) of the heavy traffic on the Western Avenue. To their south-west is a network of six inter­con­necting fishing lakes, a model boating lake and wildlife ponds, streams and wetlands. The park also has a purpose-built café.

RAF Northolt is nowadays the hub of British military flying oper­a­tions in the London area and the base for a remark­able number of lodger units, ranging from the British Forces Post Office to the Central Band of the RAF and the Polish Records Office.

At the last census, one third of Northolt’s residents were white British. The district has a wide variety of other minori­ties, including (in descending order of magnitude) those of African, Indian, Caribbean, Polish, Pakistani, Sri Lankan, Afghan, Arab, Irish and Nepalese heritage.

Shown in the photograph at the top of this article,* the Polish war memorial stands at the intersection of Western Avenue and West End Road. Northolt aerodrome was the main base for the Polish Air Force during the early part of the Second World War. The monument, surmounted by an eagle, was unveiled in 1948 and is engraved with the names of the 14 squadrons of the PAF. Behind is a wall with the names of all 1,241 members of PAF crews who died on operational flights.

* The picture of the Polish War Memorial at night at the top of this page is slightly adjusted from an original photograph, copyright Dymo4, at Wikimedia Commons, made available under the Attribution-Share Alike 4.0 International license. The picture of Northala is slightly modified from an original photograph, copyright brett jordan, at Flickr, made available under the Attribution 2.0 Generic licence. Any subsequent reuse is freely permitted under the terms of those licences.