‘The world’s first new town’ (according to some) as we understand the term today, now demolished but still named on Ordnance Survey maps 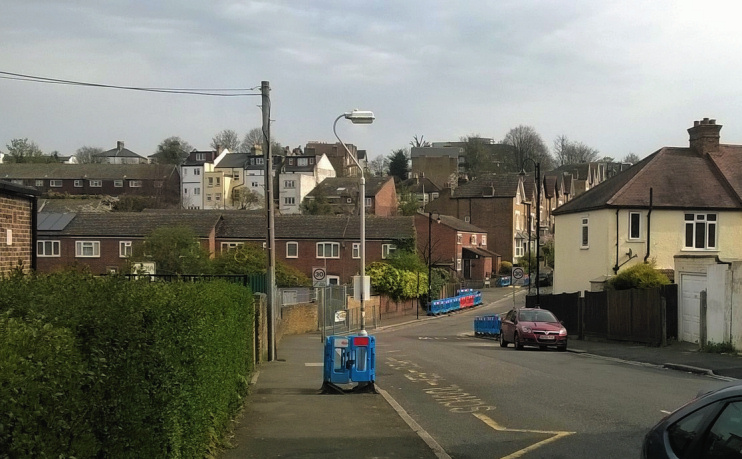 In the late 18th century Augustus Hervey, Earl of Bristol, bought a woodside cottage on Knight’s Hill Common and acquired several acres of surrounding land from the arch­bishop of Canter­bury. Like many wealthy aris­to­crats he wanted to establish a London retreat to comple­ment his City base and his country estate.

Hervey greatly enlarged the cottage to create Norwood House. After his death, Hervey’s mistress Mary Nesbitt lived on at Norwood House, playing a shadowy role in European political affairs as an agent of the British govern­ment. The mansion has been owned by the Sisters of Our Lady of Fidelity since the mid-19th century and has mostly been used for educa­tional purposes. Nuns continue to occupy part of the site.

In the 1850s, following the decision to rebuild the Crystal Palace at nearby Sydenham, the exhibition’s manage­ment company laid out a housing estate to the south-east of Norwood House and rows of terraced cottages with tiny gardens were packed into a 9‑acre area bordered by Rockmount Road and Oxford Road. Some of the prop­er­ties were occupied by builders working on the Crystal Palace project.

The new town was endowed with three public houses and enclosed by a high brick wall, which was mainly intended to prevent residents from disturbing the neigh­bouring community after payday carousing.

Croydon council began to compul­so­rily purchase run-down prop­er­ties from 1955 and by 1967 Norwood New Town had been entirely bulldozed. It was subse­quently recon­structed with housing of less character and few amenities, on a landscape of softened gradients.

* The picture of Rockmount Road at the top of this page is cropped from an original photograph, copyright Christopher Hilton, at Geograph Britain and Ireland, made available under the Attribution-ShareAlike 2.0 Generic Licence. Mr Hilton comments: “The dip in the road at the bend represents the course of the River Effra, one of London’s ‘lost’ (largely-culverted) rivers.” The main branch of the Effra rises just to the south-east, approximately where Westow Park stands today – according to Diamond Geezer.