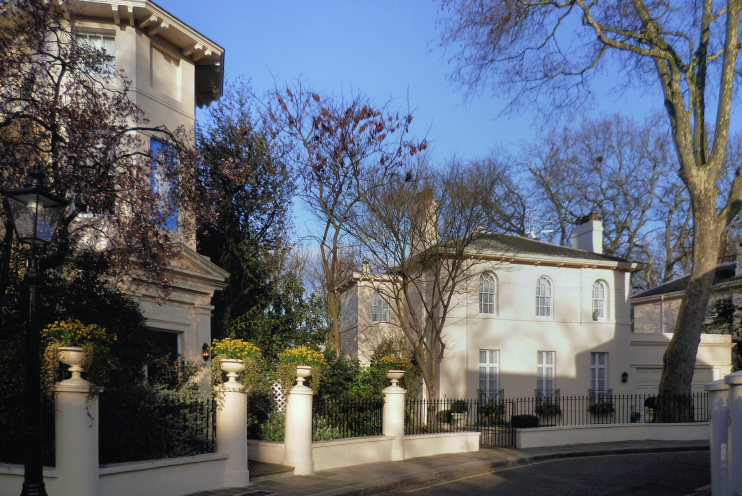 Park Village was created in the 1820s by John Nash as part of his master plan for Regent’s Park. Park Village West – which survives intact as “a perfect example of rus-in-urbe”† – is a compact crescent located just north of Regent’s Park barracks, off Albany Street.

Nash and his protégé James Pennethorne combined stuccoed villas and terraces of sharply differing propor­tions and styles, including Gothic, Ital­ianate and Tudor, on either side of an arm of the Regent’s Canal that was later filled in.

Among the early residents was Dr James Johnson, physician to William IV. Johnson lived at 12 Park Village West, possibly the most impres­sive villa in the whole development.

A few doors away at No.17, Dr EB Pusey founded the Anglican Church’s first sister­hood in 1845, which was soon followed by others in England and North America.

Just a gener­a­tion after the project’s comple­tion, most of the houses on the east side of Park Village East were torn down to make way for the London and Birm­ingham railway.

The village was a model for subse­quent Victorian estates and has even been iden­ti­fied as the first modern suburb, albeit in miniature – but there are many other contenders for a title that is so hard to define, from Clapham, south London, to Cambridge, Massachusetts.

* The picture of Park Village West at the top of this article is adapted from an original photograph, copyright Marathon, at Geograph Britain and Ireland, made available under the Attribution-ShareAlike 2.0 Generic Licence. Any subsequent reuse is hereby freely permitted under the terms of that licence.
† Ian Nairn, in Nairn’s London