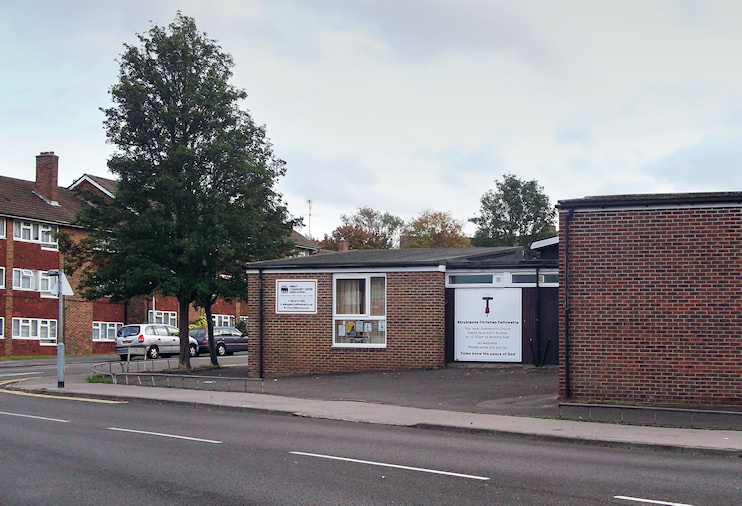 When the woods and farmland of Spring Park were subur­banised in the 1920s, the part between Links View Road and Shirley Church Road escaped the process by its conver­sion to a 137-acre golf course. But after the Second World War, Croydon council responded to its acute housing shortage by compul­so­rily purchasing the course and filling the northern part of the site with prefab­ri­cated homes, flanking streets named after trees, bushes and shrubs. The southern part was retained as public open space.

The council built a permanent estate in the late 1950s and early 1960s with a mix of short terraces of houses and three-point blocks of low-rise flats. The houses had back gardens and the blocks all offered close access to communal greenswards and children’s play areas. Shops, a community hall (shown in the photo­graph above*) and a doctor’s surgery were among the amenities built on Broom Road. Fir Tree Avenue and the southern part of Gorse Road were renamed Shrub­lands Avenue.

The Shrub­lands estate now has 260 houses, most of which have been sold to private owners, and 770 flats and maisonettes, many of which remain in council ownership. In the late 1990s £5 million worth of improve­ments were carried out, including measures to improve security and reduce the fear of crime. In 2001 the council launched an action plan to further improve Shrub­lands’ housing and envi­ron­ment, and the health of its residents. All the council houses now have central heating, cavity wall and roof insu­la­tion and double glazing.

To the south of the estate is the 68-acre Shirley Heath, once known as Jackson’s Common, which has a mix of woodland, open heath, football pitches and play areas.

* The picture of Shirley Community Centre at the top of this page is adapted from an original photograph, copyright David Anstiss, at Geograph Britain and Ireland, made available under the Attribution-ShareAlike 2.0 Generic Licence. Any subsequent reuse is hereby freely permitted under the terms of that licence.