An urban community in West Euston, centred on Tolmers Square 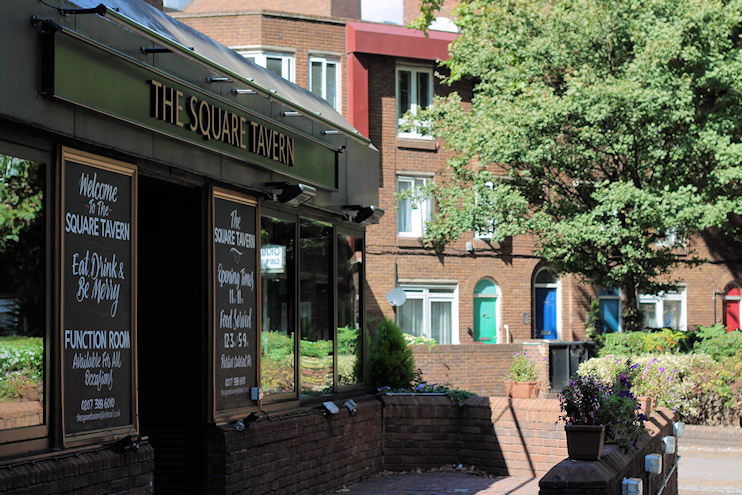 Tolmers Square was laid out with housing from 1861 to 1864 on land belonging to the New River Company, and named after a Hert­ford­shire manor near the river’s source. The square’s site had previ­ously been filled with water: latterly in the form of a reservoir, which the New River Company had created from a large, pre-existing pond.

The prop­er­ties of Tolmers Square were built to a standard that was designed to attract the middle classes, but with its close proximity to the noise and grime of Euston station (and a foundry behind the houses on the south side) this was an irre­deemably poor quarter, and the homes were soon subdi­vided for multiple occupation.

By 1871 5,000 people were crammed into a twelve-acre area, which continued to evolve in piecemeal fashion with many prop­er­ties under­going several changes of use. The square’s central chapel became a cinema in 1923.

Greeks and Cypriots came here after the Second World War, followed a few years later by the first Asians, who began to open restau­rants on Drummond Street.

From the late 1950s the neigh­bour­hood attracted the interest of property devel­opers who saw the potential for the replace­ment of houses with offices, and residents began a long campaign of resistance.

In the early 1970s the struggle to save Tolmers Village – as it was dubbed – became a cause célèbre with the left, and students from nearby Univer­sity College joined with squatters and trade unionists in resisting evictions.

The activists failed to prevent the destruc­tion of much of the original housing, but succeeded in persuading Camden council to compul­so­rily purchase the site from the property company Stock Conver­sion. Plans to construct half a million square feet of commer­cial space were abandoned and Tolmers Square was rebuilt with council flats, plus one small office block with a pub on the ground floor. Orig­i­nally called Tom Tiddler’s Tavern, it is now The Square Tavern, a Young’s house.