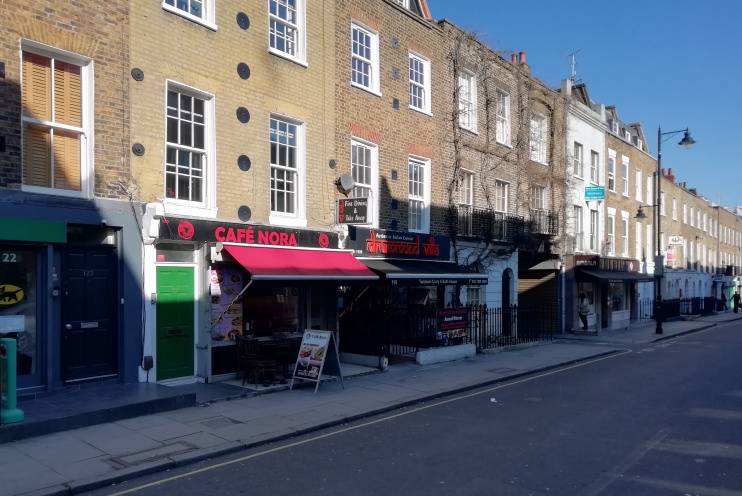 This has been a densely built-up neigh­bour­hood for nearly two centuries. A service district was laid out east of Albany Street from the mid-1820s onwards, with three squares that were initially planned as markets for the sale of hay, vegeta­bles and meat. Only Cumber­land Market, the hay and straw market in the north, ever served its intended purpose – which was to supersede the original function of the West End’s Haymarket.

Christ Church was built in 1837, primarily for the working class residents of the Cumber­land Market area. It is now St George’s [Greek Orthodox] Cathedral. To the east, St James’s Gardens were made in 1887 out of a century-old burial ground that had been estab­lished for St James’s Piccadilly.

Much of West Euston’s original housing was destroyed either by bombs or the wrecker’s ball in the mid-20th century. Built in several stages and styles, the Regent’s Park estate after­wards filled most of the western side. To the south-east, the rede­vel­op­ment of Tolmers Village became a left-wing cause célèbre in the early 1970s.

West Euston takes in Drummond Street (shown in the photo­graph at the top of the page) and its neigh­bours, where several late-Georgian terraces survive. This micro-locality is (or was) sometimes called ‘Camden’s Little India’ – primarily because of its restau­rants rather than the ethnicity of local residents, who are more likely to be of Bengali origin if they’re from south Asia at all.

Behind the ‘mixed-use campus’ at Regent’s Place, where it’s another world, much of West Euston exhibits a high degree of multiple depri­va­tion, which means that residents suffer dispro­por­tion­ately from the effects of crime, unem­ploy­ment and ill-health, and low levels of educa­tional attain­ment and income. The West Euston Part­ner­ship was estab­lished to help tackle these issues (or their conse­quences) and receives funding from a variety of public resources and from British Land, the devel­opers of Regent’s Place. Often, these kinds of inti­tia­tives get about five years’ funding and then disappear, but this part­ner­ship has been going strong for more than two decades now. Its projects have included a community resource and advice centre on Hampstead Road and the ‘Hpod’ healthy living centre, which opened on Cumber­land Market in 2006. A community festival is held in Cumber­land Market in mid-September each year.

Around the time of the First World War the Cumberland Market Group evolved among the locality’s artistic community as a successor to the Camden Town Group.

Postal district: NW1
Further reading: Cumberland Market at Wikipedia (like some of the best Wikipedia articles this is primarily the work of a single knowledgeable enthusiast)