The south-western part of Bexleyheath, lying east of Danson Park 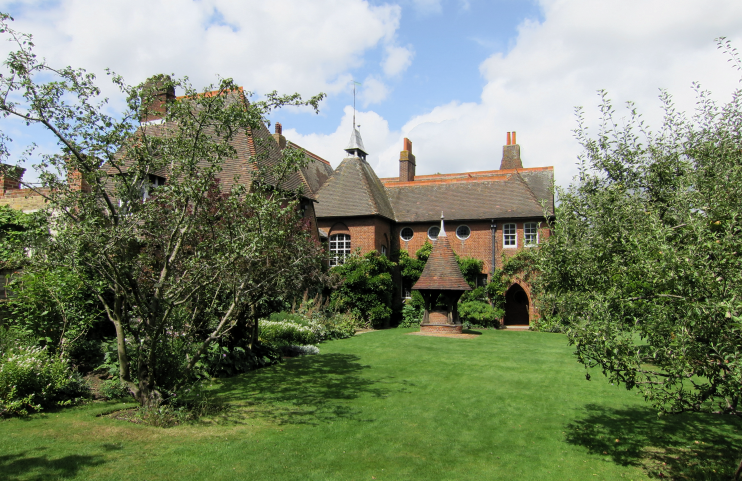 Indi­ca­tions of Bronze Age habi­ta­tion have been discov­ered in Upton. A 17th-century farm building, once known as Wye Lodge, survives in much-altered form on Lion Road.

Upton was an isolated heathland hamlet with a handful of pretty cottages and a couple of public houses when Philip Webb and William Morris came here to build the ideal­istic Red House. The pair had conceived the notion while rowing down the River Seine in the summer of 1858.

With its informal, asym­metric design, Red House repre­sents one of the earliest expres­sions of Arts and Crafts prin­ci­ples. The German scholar Herman Muthesius later described it as “the first private house of the new artistic culture, the first house to be conceived as a whole inside and out, the very first example in the history of the modern house.” Morris lived here from 1860 to 1865.

Bexley cottage hospital (now the Upton Centre, a mental health unit) opened at 14 Upton Road in 1884. Towards the end of the 19th century, Bexley­heath began to spread towards Upton with the building of the Oaklands estate south of the Broadway. Ribbon devel­op­ment along Upton Road in the late 1920s and early 1930s marked the absorp­tion of the hamlet into the suburbs.

The architect Edward Hollamby bought Red House in 1952 and restored it, living there until his death in 1999. The National Trust subse­quently acquired the property for around £2 million. To protect Red House and some nearby cottages, much of Upton is desig­nated a conser­va­tion area and the house itself has grade I listed status.

* The picture of Red House at the top of this page is adapted from an original photograph, copyright Oast House Archive, at Geograph Britain and Ireland, made available under the Attribution-ShareAlike 2.0 Generic Licence. Any subsequent reuse is freely permitted under the terms of that licence.