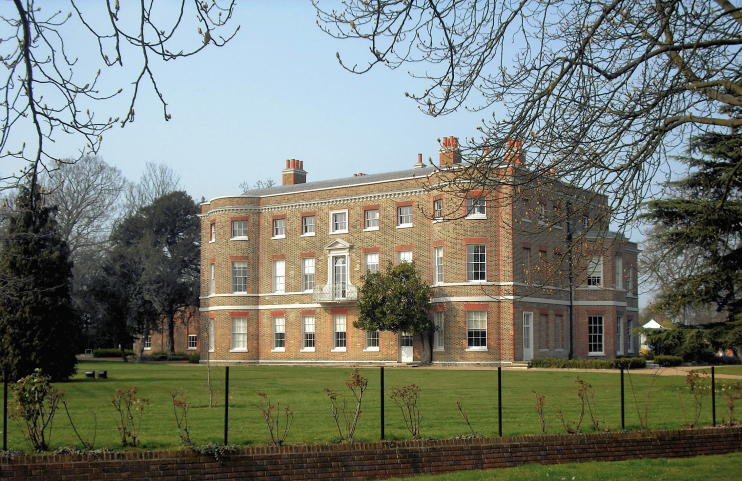 The Valen­tines name probably derives from a 16th-century landowner. A house was built here in the late 1690s, probably for Elizabeth Tillotson, widow of an arch­bishop of Canter­bury, but succes­sive enlarge­ments and improve­ments have erased almost every trace of this building.

Shown in the photo above,* the mansion that stands today dates primarily from phases of work in 1769 and 1811. The council acquired most of the grounds and opened them in 1899, orig­i­nally as Central Park. Following the death of the mansion’s owner in 1902, Ilford council bought the remainder of the grounds and extended the park.

Begun in 1909, the Valen­tines Park estate was one of the last of the Victorian and Edwardian schemes that entirely trans­formed Ilford from farmland to suburb within the space of two decades.

The council acquired Valen­tines mansion itself in 1912 and it served as a home for Belgian refugees during the First World War and later as offices for the local public health authority.

With the formation of the London Borough of Redbridge in 1965, Valen­tines became home to the council’s housing service, which vacated the building in 1993. It lay empty and increas­ingly shabby until its exterior was restored in 2002. Over £3 million of council and lottery money was secured for the reno­va­tion of the interior, and it is now open to the public three days a week. Admission is free.

Valen­tines Park is one of east London’s loveliest spots, with formal gardens, lakes and land­scaped parkland, as well as 26 tennis courts.

The Valen­tines ward nowadays has a predom­i­nantly Asian ethnic mix, including signif­i­cant numbers from Indian, Pakistani and Bangladeshi back­grounds. White British residents make up 14 per cent of the total. A high propor­tion of homes are privately rented.

* The picture of Valentines Mansion at the top of this page is slightly modified from an original photograph, copyright Klovovi, at Flickr, made available under the Attribution 2.0 Generic licence. Any subsequent reuse is freely permitted under the terms of that licence.