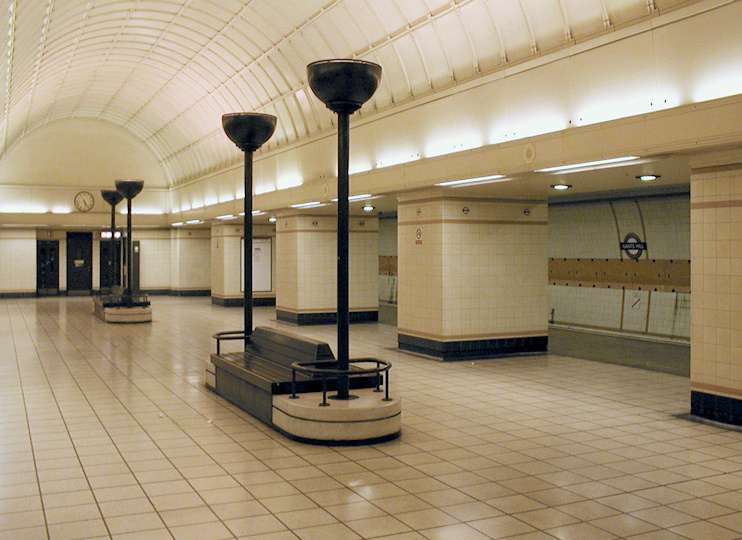 Gants Hill’s name relates to medieval landowners the Le Gant family, who orig­i­nated from the Belgian city of Ghent.

This was a purely agri­cul­tural district until after the First World War, when the Corpo­ra­tion of London took advantage of govern­ment subsidies to begin laying out an estate of 2,000 cottages on farmland that stretched from just west of Cranbrook Road eastward to Horns Road.

In 1921 the govern­ment had second thoughts about the whole scheme and withdrew its subsidies, prompting the Corpo­ra­tion to call a halt to the project when only 220 homes had been built. The land reverted to the farmer, even though foun­da­tions had already been laid for many more properties.

The rest of the area was rapidly built up with afford­able housing that abandoned the substan­tial propor­tions of earlier prop­er­ties nearer Ilford.

The art deco Savoy cinema (later an Odeon) became a local landmark in 1934.

Designed by the incom­pa­rable Charles Holden, Gants Hill station opened on the Fairlop loop of the Central line in 1947, with a lower level concourse (shown in the photo above) that has been nicknamed Moscow Hall on account of its resem­blance to the stations of the Moscow metro, though on a more modest scale. Bolstered by the new tube connec­tion, Gants Hill gained blocks of offices over the following two decades.

The shopping centre has suffered a severe decline in recent times, with many premises lying closed empty and boarded up, while the Odeon was demol­ished in 2003 and replaced by flats. The cinema is remem­bered in a pavement mosaic placed outside a pizza restau­rant in the following year.

In response to the pervading air of decline, Redbridge council convened a task force with repre­sen­ta­tives of the resi­den­tial and business commu­ni­ties. The result was a ‘town centre area action plan’, some of which was never implemented.

Gants Hill has a substan­tial Jewish popu­la­tion, with syna­gogues and Jewish community centres and schools across the area.

This was the childhood home of Louise Wener, who fronted the Britpop band Sleeper in the 1990s and is now an author. She has been quoted as saying of Gants Hill, “There’s something about growing up in the dregs, the badlands, away from it all … [where] the main cultural attraction is its roundabout.”