A semi-rural hamlet situated between Barkingside and Hainault, and the busy roundabout to its west

Fullwell Cross may have been the site of one of Barking Abbey’s medieval fields, Hanchem­stede, later Hampstede Croft. Its modern name may derive from Adam Ful(l)well, who leased a farm from the abbey at what became Fullwell Hatch, though some author­i­ties insist that the name is a corrup­tion of ‘foul well’, as is the case with Fulwell in south-west London.

To the east lay Fairlop Plain, which took its name from a lopped oak tree, beneath which annual fairs were held from around 1725. The tradition was begun by a Wapping man named Daniel Day, who owned land here. At first held only for Day’s employees, the fairs later drew thousands on the first Friday of July.

Gypsies gave Fairlop a Romany name in the late 18th-century: ‘Boro-ruke­neskey gav’ – meaning ‘Great tree town’. Nearly 40 British places had Romany names but Fairlop was the only settle­ment in the metro­pol­itan area to be so honoured, apart from London itself, which was ‘Mi-krauliskey gav’ – ‘My king’s town’.

Daniel Day died in 1767 and was buried in a coffin made with wood from the Fairlop Oak. The magnif­i­cent tree, which boasted a trunk with a circum­fer­ence of 36 feet, was blown down in 1820 after being killed by the many fires that had been lit around it. Henry Milbourne’s painting, below, shows the state of the tree a few years before its demise. The Fairlop Fair continued until the mid-1850s. 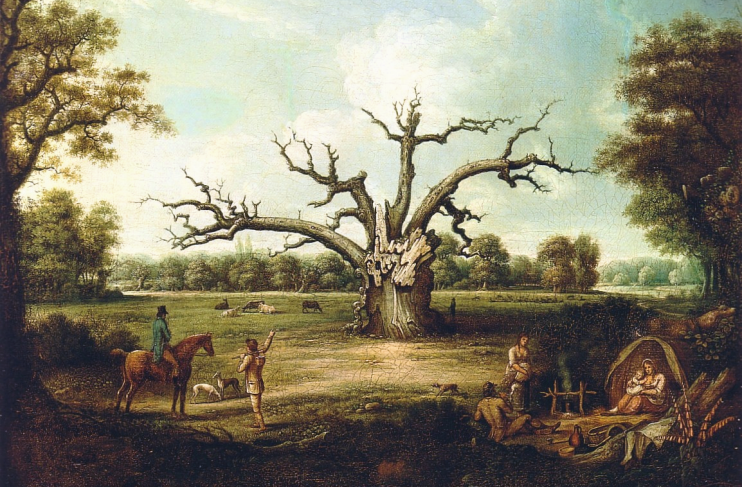 Fairlop station opened in 1903 and ran a steam service until 1947, when the Fairlop loop became part of the London Under­ground network.

Fairlop primary school was built in 1933 and the State cinema followed in 1938. The latter is now a bingo hall operated by Gala – saviour of unwanted classic cinemas – without whom the structure would by now be derelict or demol­ished or converted to a branch of the Church of Euthanasia or somesuch.

Fairlop Plain was used as an aircraft base during the Second World War, but plans to create a civil airport here were abandoned in 1953. Ilford council then bought the site from the City of London, and profited from the extrac­tion of over a million cubic yards of gravel. The resultant hole was subse­quently filled with refuse and has been land­scaped to create Fairlop Waters golf course and country park. There is a nature reserve, an activity centre, and water sports and angling on Fairlop Lake. Plans to create Greater London’s only horse racing course on green-belt land at Fairlop Waters were rejected in 2002.

Shown in the small photo, a ‘new Fairlop Oak’ was planted at the centre of Fullwell Cross round­about as part of the Festival of Britain cele­bra­tions, around the time that most of the housing here was built – as was the pub on Fence­piece Road that is now Wether­spoon’s New Fairlop Oak.

Fullwell Cross library (shown in the photo at the top) and swimming baths were opened in 1968. The project’s lead architect was Frederick Gibberd, who also designed Liver­pool’s Metro­pol­itan Cathedral, which faintly resembles a scaled-up version of the library.

Around the library and pool, forth­coming enhance­ments to the public realm will – if delivered – include improved and enlarged access provision to the leisure centre and a new pocket park to the immediate south.

In September 2017 JD Wether­spoon submitted a planning appli­ca­tion to build an “unashamedly contem­po­rary” four-storey, 47-bedroom hotel in the car park at the New Fairlop Oak.

The Fairlop Fair Song is a traditional ballad that records the custom of riding through the fair while seated in boats:

Let the music sound as the boat goes round
If we tumble on the ground, we’ll be merry, I’ll be bound;
We will booze it away, dull care we will defy,
And be happy on the first Friday in July.