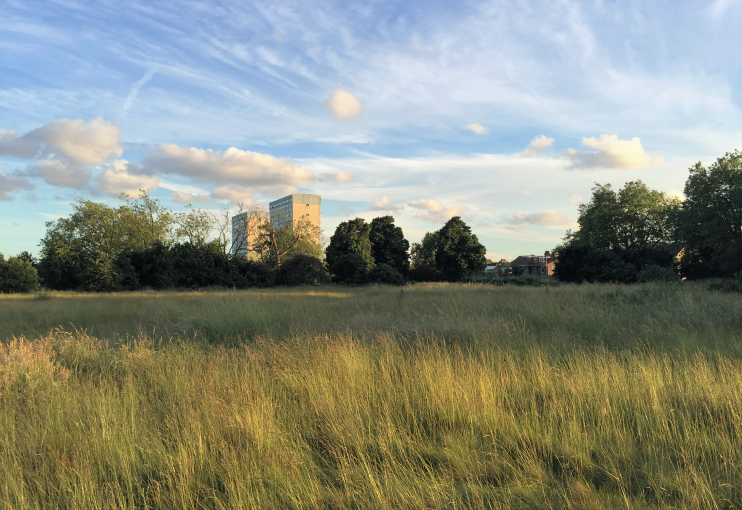 Wanstead Flats consti­tute the south­ern­most part of Epping Forest but most of the trees were cleared several centuries ago. The area was formerly known as the Lower Forest or Wanstead Heath and commoners had ‘rights of turbary’ here, which meant that they could dig peat for fuel.

In the late 18th century an annual market for cattle from Wales, Scotland, and the north of England took place from the end of February to the beginning of May.

Commoners consis­tently resisted attempted encroach­ments by neigh­bouring landowners and fought legal battles with Lord Morn­ington, Earl Cowley and others from the 1850s until the flats were preserved under the Epping Forest Act of 1878.

From later in the 19th century until the outbreak of the First World War, an Easter pleasure fair was held here.

Alexandra Pond (collo­qui­ally Alex Pond) was created in 1906–7 and named in honour of Edward VII’s queen-consort, Alexandra of Denmark.

Dames Road Pond (also known as the Model Yacht Pond) was redesigned as a conser­va­tion and wildlife feature in 2002 and renamed the Jubilee Pond. By the time of Her Majesty’s next jubilee serious problems of water loss had become evident, neces­si­tating a further programme of enhance­ments that have included the instal­la­tion of a new imper­me­able lining.

* The picture entitled Leytonstone evening at the top of this page is adapted from an original photograph at Flickr, copyright Giles Williams, made available under the Attribution 2.0 Generic licence. The small picture of Wanstead Flats is adapted from an original photograph, copyright Dave Marley, at Geograph Britain and Ireland, made available under the Attribution-ShareAlike 2.0 Generic Licence. Any subsequent reuse is hereby freely permitted under the terms of those licences.