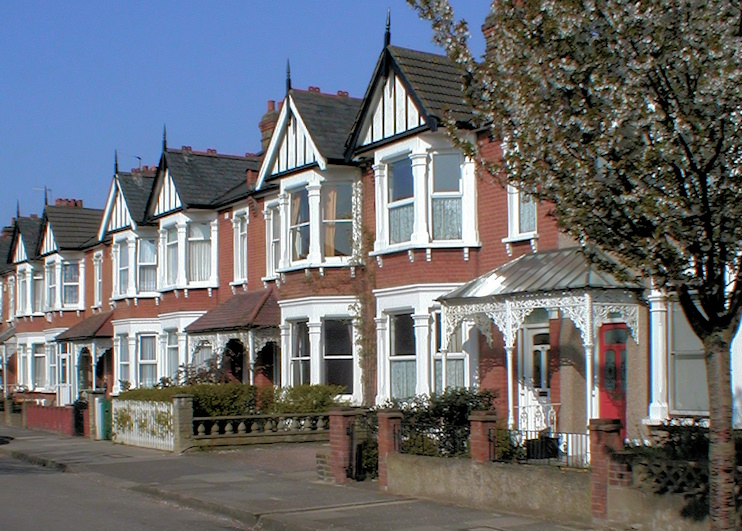 Aldersbrook’s name dates from the 16th century and refers to alders growing beside a tributary of the River Roding. This place was earlier called Nakedhall – an allusion to the exposed position of the manor.

The dynasty that owned Wanstead House steadily acquired and altered the farmland of Alder­s­brook from 1786 onwards, knocking down its manor house, selling land to the Corpo­ra­tion of London for use as a cemetery and auctioning building plots from 1899. The plots’ condi­tions of sale included clauses stip­u­lating that the prop­er­ties be rela­tively expensive, espe­cially on the edges of the estate where the £500 detached houses had views over Wanstead Park and Flats. These sold to profes­sional persons, while the £300 semis and terraces on the main streets went to lower middle class occupiers, usually renting rather than buying.

More than a thousand homes were built by 1910 and the variety of devel­opers, combined with the rapidly changing archi­tec­tural fashions of the time, resulted in a miscel­lany of styles.

Junior and infants’ schools were built in 1908 and 1911, and they have since merged to form Alder­s­brook primary school.

St Gabriel’s church was completed in 1914 with financial assis­tance from the Misses Nutter, who also helped fund the construc­tion of Holy Trinity church in South Woodford. The architect was Charles Spooner.

Some houses that were bombed in the Second World War were after­wards rebuilt almost indis­tin­guish­ably from their predecessors.

In the 1960s council housing replaced the children’s home and isolation hospital that had stood on Aldersbrook’s western and eastern sides, respec­tively. On the south side of Alder­s­brook Road, Heather­wood Close juts into Wanstead Flats where Alder­s­brook Farm used to stand.