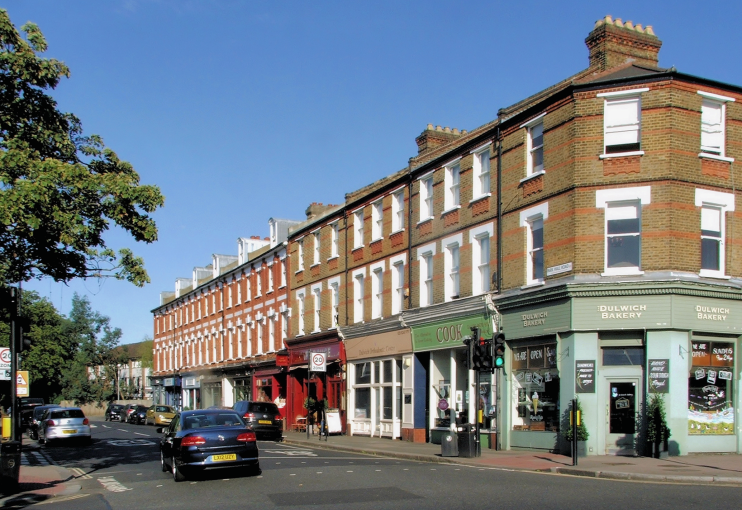 Although some believe that the locality is an estate agents’ invention, West Dilwysh was first recorded in 1344.

Hesitant growth began here after the opening of Dulwich station in 1863 (it did not become West Dulwich until 1926). The railway company laid out Thurlow Park, Rosendale and Turney Roads to provide access to the station, although these were at first unsur­faced. Building frontages were adver­tised but take-up was slow.

Rosendale Road’s eventual width and grandeur was suppos­edly the conse­quence of a plan to make it part of a grand proces­sional route to the Crystal Palace. A spec­u­lator attempted to profit from this by laying out Tritton Road in its path, hoping to be bought out, but his bluff was called and the scheme was abandoned.

All Saints church was built in 1891. A spec­tac­ular structure for such a modest suburb, it is deservedly grade I listed.

The first houses in West Dulwich were very select, but prop­er­ties became progres­sively more afford­able as devel­op­ment spread westward. The main phase of construc­tion came in the years before the First World War, although gaps were still being filled in the 1930s.

The area suffered badly in the Second World War. West Dulwich Congre­ga­tional church, which stood on Chan­cellor Road (now Grove), was wiped out by a direct bomb strike in 1940. All Saints was damaged but subse­quently restored.

Five V1 rockets fell on West Dulwich in 1944, prompting a post-war recon­struc­tion programme that included the creation of the Rosendale Road estate.

In 1999 the unlucky All Saints church was gutted by a fire caused by a fan heater that had been left on overnight. An extensive reno­va­tion programme has since restored the exterior and improved the interior.

Pop funsters the Bonzo Dog Doo Dah Band first came together at 164A Rosendale Road, in 1962.

* The picture of Park Hall Road, West Dulwich, at the top of this page is adapted from an original photograph, copyright Chris Whippet, at Geograph Britain and Ireland, made available under the Attribution-ShareAlike 2.0 Generic Licence. Any subsequent reuse is freely permitted under the terms of that licence.