The Eleanor Cross at Charing Cross 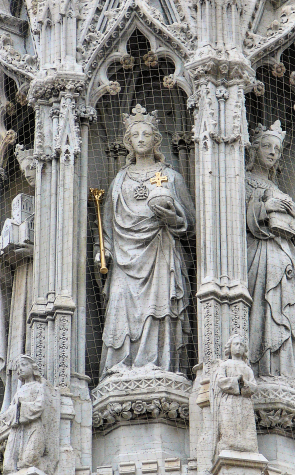 The medieval village of Charing probably took its name from the Old English cerring, ‘a turn’, referring either to the bend in the Thames or in the westward road from the City.

According to legend, Eleanor of Castile, queen consort of Edward I, sank here and rose again at Queen­hithe. The story seems to have begun with an anony­mously written ballad that suggests, among much anti-Spanish derision, that Eleanor murdered the lord mayor of London’s wife by thrusting venomous snakes into her bosom. When Edward accused his queen of the deed she denied it and wished the ground might swallow her up if she lied:

With that, at Charing Cross she sunk
Into the ground alive;
And after rose with life again,
In London, at Queenhithe.

There­after she languished 20 days in pain, and confessed to the crime and also to bearing a child by a friar. The poet’s choice of location for the sinking is curious (but presum­ably delib­erate) as Charing wouldn’t have become Charing Cross had it not been for the king’s grief at his wife’s death at the age of 49.

Eleanor died at Harby in Notting­hamshire in 1290 and was buried in West­min­ster Abbey. Crosses were set up at each of the 12 places where her body rested on its journey south­wards, of which three survive: at Geddington and Hard­ing­stone (both in Northamp­ton­shire) and Waltham (now Waltham Cross, Hertfordshire).

The cross at Charing, which stood just to the south of what is now Trafalgar Square, was demol­ished in 1647 and much of its stone was used to pave Whitehall. An eques­trian statue of Charles I was erected in its place in 1675 and now marks the exact point from which all distances from London are measured.

The present Gothic cross in the courtyard of Charing Cross station (detail shown above) was designed by Edward Middleton Barry, sculpted by Thomas Earp and erected in 1865.