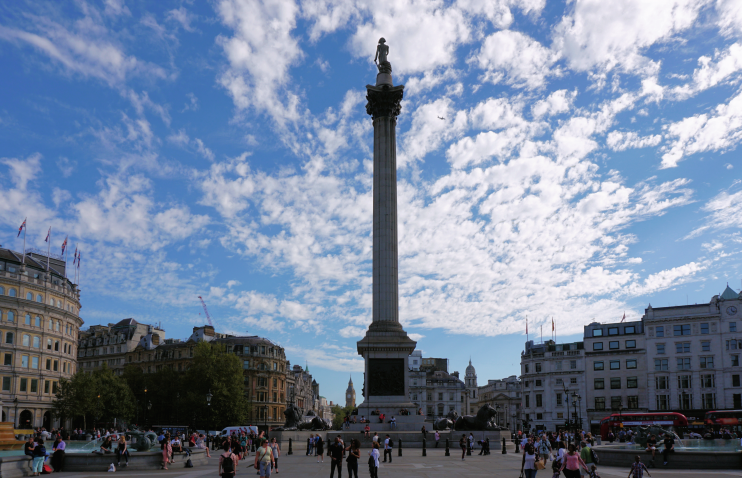 Exca­va­tions here have produced signif­i­cant findings of elephant and hippopotamus remains, dating from around 120,000 bc.

The church of St-Martin-in-the-Fields has stood to the north-east of the square since the 13th century and has twice been rebuilt.

From the 14th to the 19th centuries the present Trafalgar Square was the site of the royal mews, where Geoffrey Chaucer once toiled as a clerk of works.

The square was laid out in 1830 and named after the battle at which Admiral Horatio Nelson died. Seven years later William Wilkins’ National Gallery was erected on the north side. This was followed in 1843 by Edward Baily’s statue of Nelson, erected in cele­bra­tion of his naval victories at Cape St Vincent, the Nile, Copen­hagen and Trafalgar and mounted on a granite column 184 feet high.

Also in 1843, an eques­trian statue of George IV was placed on a plinth in the north-east corner of the square, with statues of imperial generals Charles James Napier and Henry Havelock later added in the south-west and south-east corners.

It was not until 1867 that Nelson’s memorial was finally completed by the instal­la­tion of Sir Edwin Landseer’s four bronze lions. Admiralty Arch, which separates the Mall from Trafalgar Square, was designed by Sir Aston Webb in memory of Queen Victoria. Its central arch gate is only opened on cere­mo­nial occasions. Canada House and South Africa House, the high commis­sions of their respec­tive countries, overlook the east and west sides of the square.

From the Chartists of 1848 to the poll tax rioters of 1990, Trafalgar Square has been a focal destination for protest marches and demonstrations against the government. It was also famed as the focus for London’s New Year’s Eve celebrations but revellers are nowadays encouraged to congregate on the banks of the Thames.

Every Christmas the city of Oslo donates a Norwegian spruce for the square, in recognition of Britain’s assistance to Norway during the Second World War.

* The picture of Trafalgar Square at the top of this page is modified from an original photograph, copyright Miguel Discart, previously at Flickr, made available under the Attribution-ShareAlike 2.0 Generic Licence. Any subsequent reuse is freely permitted under the terms of that licence.