Agatha Christie created the Belgian private detective Hercule Poirot in 1920 and he appeared in scores of her stories over the following 55 years. In recent times he was convinc­ingly portrayed by David Suchet in ITV’s Agatha Christie’s Poirot, a long-running series that brought almost all the char­ac­ter’s print appear­ances to life on screen. Suchet bowed out of the series in June 2013.

Suchet’s Poirot (to whom the adjective ‘dapper’ was invari­ably applied) lived in a world in which every modern building seemed to be art deco. Accord­ingly, it was essential that the tele­vi­sion incar­na­tion of his home – a flat in the fictional White­haven Mansions, Sandhurst Square – should possess the appro­priate archi­tec­ture. Florin Court, in Char­ter­house Square, Smith­field, served the purpose elegantly from the series’ first episode in 1989. Apart from changing the name above the porch, removing the cars outside and disguising their parking bays, the Poirot produc­tion designer needed to do very little to achieve the time shift to the period before the Second World War.

Florin Court is a ten-storey block built in 1936 by Guy Morgan, who had worked for Edwin Lutyens before setting up his own practice. Morgan endowed the block with wide window bands and rounded corners curving in to a recessed entrance to achieve a stream­lined style. In an opti­mistic vision of communal inter­ac­tion, Florin Court orig­i­nally had squash courts, a dining room and a cocktail bar. Nowadays, there’s a gym, a spa and a wi-fi area.

Florin Court was damaged by a fire in a first floor flat in July 2013. However, no one was hurt and the building was soon restored to its former glory. 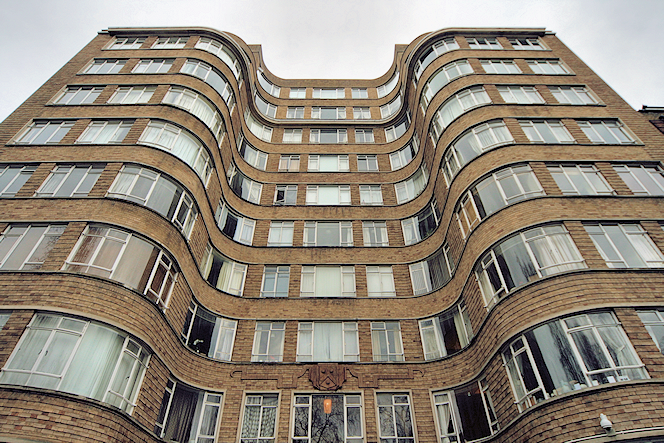