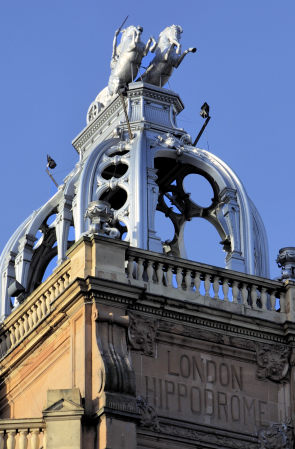 The Hippo­drome is an enter­tain­ment venue located at the corner of Cranbourn Street and Charing Cross Road, just off Leicester Square. Nowadays its facil­i­ties are primarily devoted to round-the-clock gambling but there’s also a restau­rant and an ‘intimate cabaret theatre’.

The building was orig­i­nally the London Hippo­drome, built by Frank Matcham for Edward Moss in 1900 as a circus variety theatre, with a 100,000 gallon tank in which elephants, polar bears and sea lions would swim.

Works in 1909 enlarged the stage and advanced the prosce­nium arch to better suit conven­tional variety theatre and revue shows.

From 1958 to 1982 the Hippo­drome was the Talk of the Town, a dinner-dance venue. In its heyday the Talk of the Town attracted all the leading stars, including Frank Sinatra, Sammy Davis Jr, Eartha Kitt and Tom Jones. Judy Garland’s five-week comeback engage­ment in 1968–9 broke box office records.

Subse­quently the Hippo­drome rein­vented itself several times, including as a nightclub and in 2008–9 as a circus venue for burlesque cabaret La Clique, before adopting its present incar­na­tion as a casino.