Lloyd’s of London is an inter­na­tional insurance market in the City of London and the world centre of shipping intel­li­gence. It began in the 17th-century coffee house of Edward Lloyd in Lombard Street. It was orig­i­nally a market for marine insurance only but now deals with nearly all forms of insurance. Lloyd’s was incor­po­rated by Act of Parlia­ment in 1871. Insurance is accepted by indi­vidual under­writers, not by Lloyd’s of London, which provides the premises, intel­li­gence and other facil­i­ties. Lloyd’s agents throughout the world send shipping infor­ma­tion, which is published in Lloyd’s List and Lloyd’s Shipping Index.

One Lime Street, collo­qui­ally known as the Lloyd’s building, has been the head­quar­ters of Lloyd’s of London since 1986. Designed by the Richard Rogers Part­ner­ship, its distinc­tive char­ac­ter­istic is the exter­nal­i­sa­tion of struc­tural details and utilities such as ducts and glass lifts. Combined with stainless steel cladding, and espe­cially when illu­mi­nated at night, the effect at the time of its construc­tion was ultra-modern. 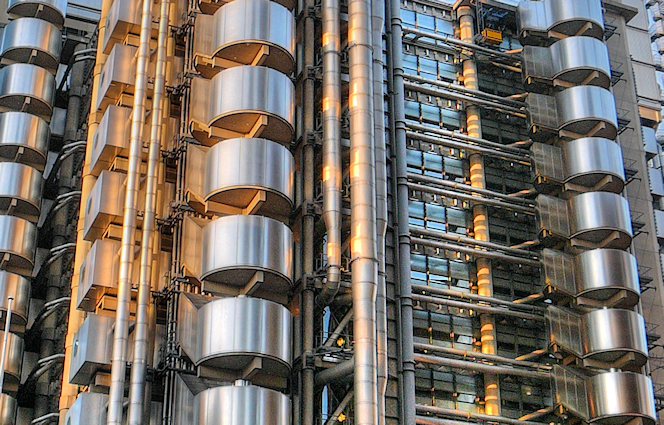