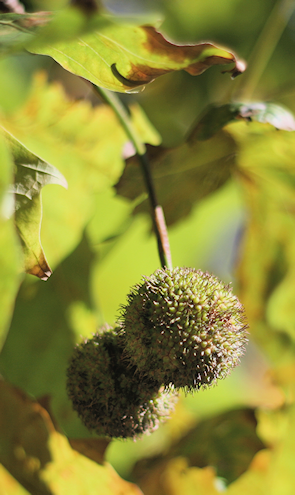 Green is the plane-tree in the square,
The other trees are brown;
They droop and pine for the country air;
The plane-tree loves the town.

Platanus x hispanica (or hybrida or acer­i­folia) is the most char­ac­ter­istic tree of central London streets. It is regarded as being a hybrid of the Oriental plane and the American plane (also called the American sycamore) and may have evolved naturally from two of the parent trees standing close to each other in Spain (hence x hispanica).

The London plane has been widely grown in England since the late 17th century. It partic­u­larly caught on in Victorian London because its flaking bark helps it shrug off pollution. In addition, it can tolerate inferior and impacted soil, regular pruning and condi­tions of dampness or drought. London planes have been plen­ti­fully planted in many temperate cities, from Buenos Aires to Melbourne.

Although its indi­vidual char­ac­ter­is­tics may be confused with other trees, the combi­na­tion of its scaly plates of grey-brown bark, maple-like leaves and spiky, ball-shaped fruits (usually two or three per stalk, hanging on through winter) generally make the London plane readily identifiable.

Planted around 1685, a London plane in the woodland at Barn Elms is said to be the capital’s oldest and largest specimen of the species. When last measured, it was 115 feet high and 27 feet in girth. Chains have been attached between the tree’s main stems to guard against breakage under storm condi­tions. The Brunswick Plane is reputed to be London’s second oldest.