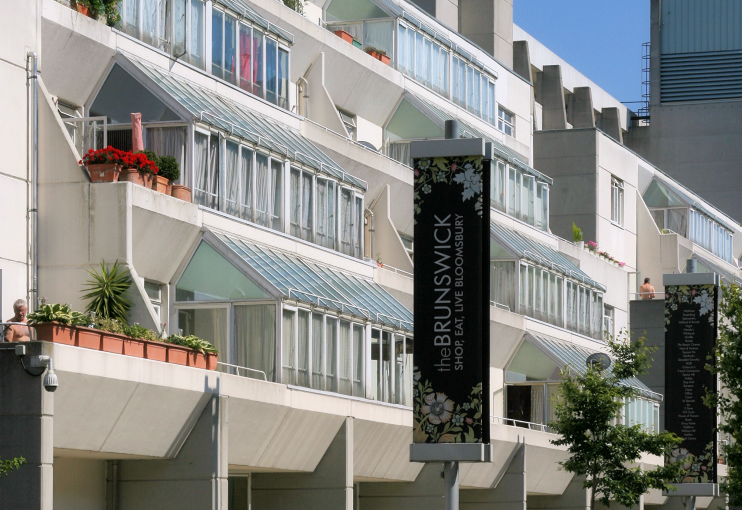 This was the site of a series of Georgian and Victorian terraces, deemed substan­dard and over­crowded by the council – but almost certainly capable of reha­bil­i­ta­tion. The architect Patrick Hodgkinson created a pair of layered terraces consisting of flats with glazed ‘winter­gar­dens’, shops at ground level and car parking below.

Many aspects of the original plan never came to fruition. A third set of flats was proposed for Handel Street in place of the Terri­to­rial Army centre; the shopping area was to have been glazed over; the concrete should have been painted cream to match the neigh­bouring Georgian stucco; and the centre was orig­i­nally intended as a private devel­op­ment by Marchmont Prop­er­ties, but Camden council stepped in to take respon­si­bility for the housing. The Brunswick Centre was conceived as a nucleus for the future rede­vel­op­ment of the entire neigh­bour­hood, which also failed to materialise.

The centre was named after neigh­bouring Brunswick Square, which was in turn named in honour of Caroline of Brunswick, who was Princess of Wales from 1795 and Queen consort from the accession of George IV in January 1820 until her death in August 1821.

Despite the many mutations, the Brunswick Centre is reckoned an archi­tec­tural success and was grade II listed in 2000. The Brunswick (as the centre is now styled) has since been rede­vel­oped by Allied London Prop­er­ties, with its shops branded as ‘Bloomsbury’s high street’. A purpose built Waitrose super­market closes off one end of the radically trans­formed retail and restau­rant area. 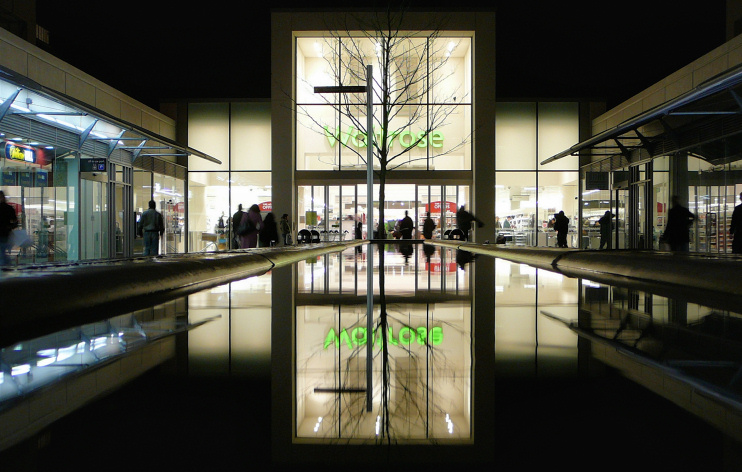 The Curzon Blooms­bury (for a long while known as the Renoir) was built as an integral part of the Brunswick Centre, on its eastern edge. The Curzon specialises in world cinema and documentaries.

When Thomas Coram’s foundling hospital was pulled down in the 1920s its archive was relocated to 40 Brunswick Square. The Foundling Museum’s collec­tion includes works of art by Hogarth, Gains­bor­ough and Reynolds as well as social history objects relating to London’s first children’s home.

Brunswick Square Gardens were re-land­scaped in 2002/3 and given new railings, paths and seating. The gardens’ Brunswick Plane is reputed to be the capital’s second oldest London plane and was desig­nated a Great Tree of London in 2009.

Brunswick Square is mentioned (eleven times) in Jane Austen’s Emma as the home of the protagonist’s sister Isabella.

The actress and comedian Catherine Tate was brought up in one of the Brunswick Centre’s council flats.