The London Millen­nium Foot­bridge crosses the Thames between St Paul’s Cathedral and Tate Modern. Its architect, Lord Foster, likened the styling to a ‘blade of light’.

The structure exhibited unex­pect­edly strong oscil­la­tions when subjected for the first time to heavy usage after it opened in June 2000. The effect was amplified when pedes­trians subcon­sciously (and in some cases delib­er­ately, after the problem was discov­ered) responded to the movement by swaying as they walked, a phenom­enon known as synchro­nous lateral exci­ta­tion. The bridge was closed while £5 million was spent on retro-fitting shock-absorbing dampers. This success­fully elim­i­nated the oscil­la­tions but has failed to entirely expunge the nickname ‘the wobbly bridge’.

The bridge exhibits an extreme degree of wobbli­ness in the film Harry Potter and the Half-Blood Prince (2009), in which it is attacked by Lord Voldemort’s Death Eaters. 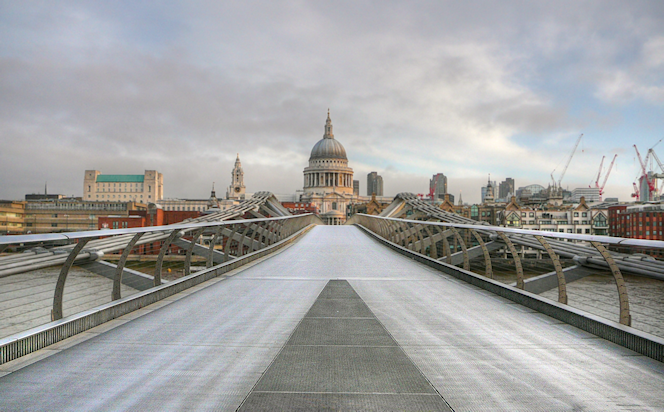