The Royal Opera House is a theatre for opera and ballet in Covent Garden, situated to the immediate north of the piazza.

The first Covent Garden Theatre opened here in 1732. After this was destroyed by fire a new incar­na­tion of the theatre opened in September 1809, charging higher prices to help cover the cost of the rebuilding. As soon as the national anthem had been sung the audience began to shout “old prices, old prices”, and the chant continued throughout much of the perfor­mance of Macbeth. A posse of Bow Street officers was called and magis­trates read the Riot Act but the crowd did not disperse until after midnight. Similar distur­bances took place for more than two months, after which John Philip Kemble, the theatre’s owner-manager, relented.

Sir Michael Costa estab­lished the Royal Italian Opera at the theatre in 1847, when the audi­to­rium was remod­elled to suit its new purpose.

In 1857 the theatre again burned down, and the present-day Royal Opera House (known to devotees as ‘Covent Garden’ or ‘the Garden’ and to insiders as ‘the House’) replaced it a year later. The building was exten­sively redesigned and modernised in the 1980s and 1990s, but it retains its classical entrance portico in Bow Street, shown in the photo­graph below.

Despite the tribu­la­tions of under­funding and recurrent criticism of its artistic standards, it remains one of Britain’s flagship cultural venues, home to the Royal Opera and the Royal Ballet. 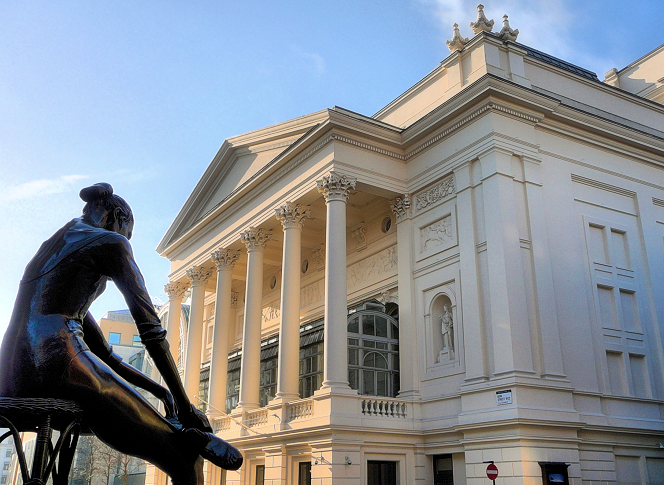 A cautionary tale: A more tightly cropped version of the above photo can be found all over the internet. That’s because this author once uploaded the image to Wikipedia/Wikimedia, under a Creative Commons licence that allows its free reuse providing the photographer is credited. Depressingly, not more than a handful (at best) of the hundreds of reusers have provided the requested attribution. Here endeth the gripe.