Stompie, or simply the Bermondsey tank, is a non-func­tional Soviet T‑34 battle tank that since 1995 has stood on a small piece of waste ground near the western end of Mandela Way in south Bermondsey.

It was named Stompie by owner Russell Gray, a local resident, in memory of James ‘Stompie’ Moeketsi (1975–89), who was kidnapped and murdered by members of Winnie Mandela’s bodyguard. This seems a curious choice. Did it perhaps represent the owner’s resent­ment of the use of Nelson Mandela’s name for a Bermondsey street, yet couching his objection in a polit­i­cally correct way? That’s purely this author’s spec­u­la­tion. Maybe it just seemed like a good name for a tank.

At first, various author­i­ties took a disap­proving interest in Stompie. Southwark council placed a ‘remove for disposal’ sticker on it, and questions were raised regarding its absence of planning permis­sion. The Ministry of Defence demanded to know whether it had been properly decom­mis­sioned, lest some miscreant should clamber aboard and rumble away down the Old Kent Road. But lately it seems to have been left alone.

The tank has been artis­ti­cally repainted on several occasions (and then adorned with graffiti). 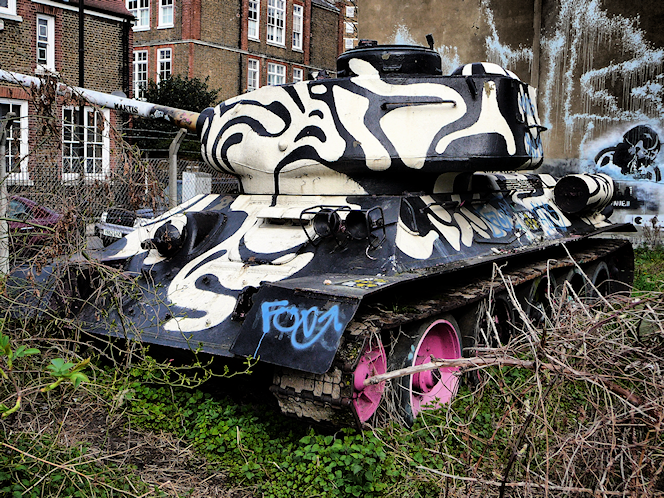