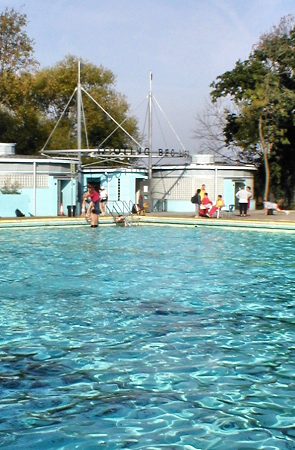 Tooting Bec lido is an impres­sive open-air swimming pool that opened on Tooting Bec Road in July 1906, orig­i­nally as Tooting bathing lake. It gained its present name in the 1930s.

Soil was excavated during the pool’s construc­tion – mostly by labourers provided by the Central (Unem­ployed) Body for London – was formed into an embank­ment and planted with trees to shield the bathers from the common.

Measuring 100 x 33 yards, the lido is said to be the largest fresh­water pool in England and the widest in Europe. The pool is unheated and is open to the public from mid-May to the end of September each year. The photo on the right was taken in mid-September.

The South London swimming club was formed here a few weeks after the pool opened. The club organises various activ­i­ties and special events at the lido, including during the winter months, though the council subcon­tracts the facility’s day-to-day manage­ment to a commer­cial operation.

New cubicles and showers replaced the old dressing sheds in 1936, a café was built, and the lava­to­ries were remodelled.

In 2001–2 a new shallow end entrance was built in art deco style. The deep end area was refur­bished in 2016 with a new pavilion and sunbathing area. As well as being a venue for fitness and sports classes, the pavilion is also intended to serve as a head­quar­ters for events such as aquathlons, triathlons and galas.