Waltham­stow town hall is the centre­piece of an imposing group of buildings that make up Waltham Forest’s civic centre, with the magis­trates’ courts to its left and the assembly hall on the right.

In 1929 the newly created municipal borough of Waltham­stow launched an archi­tec­tural design compe­ti­tion for its head­quar­ters, to be built on the site of Chestnuts Farm (also known as Clay Farm).

The compe­ti­tion attracted 70 entries and was won in 1932 by Philip Dalton Hepworth, who had studied in London, Paris and Rome but was also aware of the contem­po­rary Swedish trend towards simpli­fied clas­si­cism with art deco details. Hepworth was at the time best known for some stylish resi­den­tial creations but his subse­quent projects included churches, a county hall for Wiltshire and the designs for numerous war cemeteries.

Construc­tion of the town hall didn’t begin until 1937 and took more than five years to complete. The need for wartime economies affected the latter stages, so the interior fittings aren’t what they might have been, with locally-made plywood replacing planned oak panelling and terrazzo in the foyer instead of marble. Some intended features were omitted alto­gether. Never­the­less, the council found the money to have the building clad in Portland stone – rather than brick, as had orig­i­nally been envisaged.

The Irish sculptor John Francis Kavanagh was commis­sioned to carve motifs on the outside walls: five William Morris-inspired figures for the council chamber and ‘Tragedy’ and ‘Comedy’ on either side of the assembly hall.

The assembly hall was built in tandem with the town hall but construc­tion of the magis­trates’ court had to wait until the early 1970s. The court’s design, by the GLC Special Works Depart­ment, is very much of its time but the use of slabs of Portland stone results in a degree of harmony with its neighbours.

In June 2020 work began on a £150m project to renovate and modernise the town hall to enable better staff working, and to upgrade the assembly hall and civic square. In phase two the developer Coun­try­side will later redevelop parts of the site for land­scaping and the construc­tion of several hundred new homes. 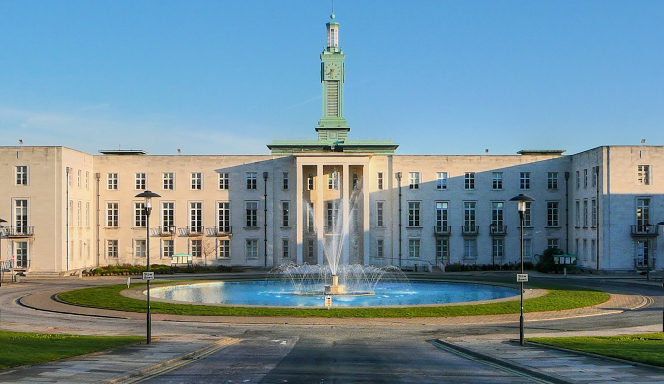