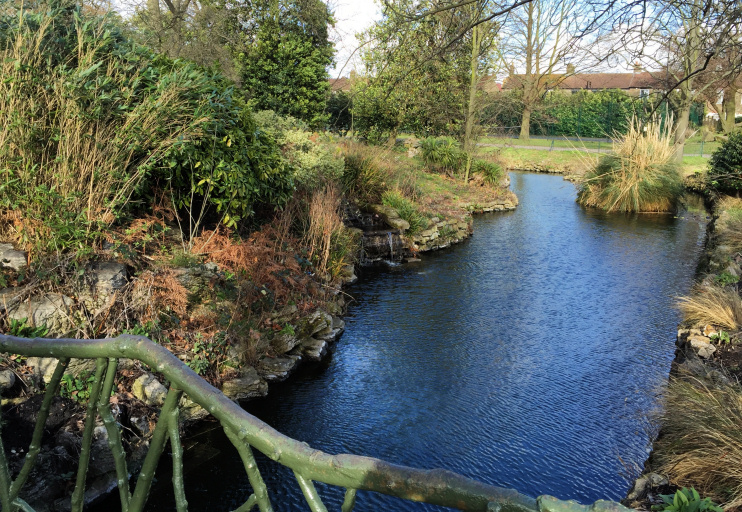 In the Middle Ages the park formed part of the grounds of a moated house called Crick­le­woods. The moat – which survives today and is shown in the photo above* – gave its name to the Water House, which was built in the mid-18th century and was also known as Winns.

The house was remod­elled in the late 18th century, endowing the frontage with its present-day appearance.

In the mid-19th century the Water House was the boyhood home of William Morris, the artist, craftsman and socialist. Later owners the Lloyd family gave the house and ten acres of gardens to the people of Waltham­stow in 1898, on condition that the council bought an adjoining 10 acres of its grounds for use as playing fields.

The remaining 86 acres of the house’s grounds were acquired by the Warner company, which laid out the Winns estate to the west. The housing bears the distinc­tive features of the company’s extensive work in Walthamstow.

Between 1911 and 1943, when the Water House was known as Lloyd Park Mansion, it served as a clinic, providing free medical and dental care for the children of Waltham­stow. Between the wars the council built houses at William Morris Close, enlarged the park and added a pavilion.

The Water House became a museum of Morris’s life and work in 1950 and also has a collec­tion of paintings and sculpture donated by the artist Sir Frank Brangwyn, who was briefly an appren­tice at Morris and Co.

Refur­bished and extended with the aid of grants and donations, the William Morris Gallery is open from Wednesday to Sunday, and admission is free. The gallery was crowned Museum of the Year in 2013, winning a £100,000 prize.

Lloyd Park has also been restored and enhanced with the aid of lottery grants and council funding. There’s now a nature area, café and community room, together with improved sports facil­i­ties, paths, lighting, railings and seating.

* The picture of the medieval moat in Lloyd Park at the top of this page is slightly modified from an original photograph, copyright Matt Brown, at Flickr, made available under the Attribution 2.0 Generic licence. The picture of Lloyd Park is adapted from an original photograph, copyright Alex McGregor, at Geograph Britain and Ireland, made available under the Attribution-ShareAlike 2.0 Generic Licence. Any subsequent reuse is hereby freely permitted under the terms of those licences.