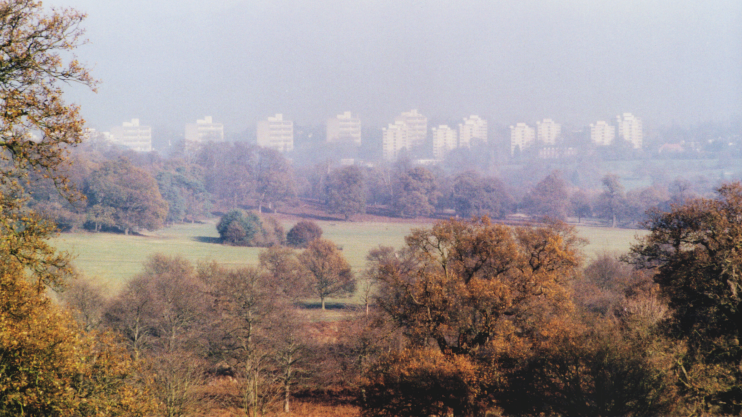 Much of the land here­abouts consti­tuted the grounds of Parkstead, a Palladian villa built in the 1760s for Lord Bess­bor­ough and later renamed Manresa House. Parts of its grounds were developed from around 1850 as a high-class suburban estate known as Coombe Park or Roehampton Park. Alton Lodge was an early-19th-century villa on the Kingston Road, occupied by Dr Thomas Hake from around 1854 until 1872.

In 1951 the architect’s depart­ment at the London County Council selected this area as the site for one of the largest and most radical housing devel­op­ments ever under­taken in London. The best villas and some of the land­scaping were preserved but 130 acres were otherwise totally cleared to make way for the project.

The Scan­di­na­vian-inspired Alton East was completed in 1955 and it was followed four years later by the much larger Alton West, which was influ­enced by the high-rise creations of the French architect Le Corbusier. Both stages include a mix of tower blocks, maisonettes and terraced houses, permit­ting a combi­na­tion of high popu­la­tion density with extensive open spaces. The slabs on stilts of Downshire Field were the estate’s most important inno­va­tion but novel construc­tion, heating and venti­la­tion systems were also employed.

In 2002 Wandsworth council took back control of the estate from the residents’ manage­ment organ­i­sa­tion, following its decla­ra­tion of insol­vency. This brought to an end the largest such venture in the UK, which had been over­whelm­ingly supported in a ballot of tenants three years earlier.

The Alton estate has an ethni­cally diverse popu­la­tion, speaking Croatian, French, Portuguese and several African languages. The estate is now a conser­va­tion area and most of the buildings also have listed status.

Dr Thomas Hake of Alton Lodge was a cousin of General Gordon of Khartoum and a friend of Dante Gabriel Rosetti. The poet and painter stayed at Alton Lodge in 1872 while recovering from a mental collapse.