This is London’s greatest royal park, extending over 2,500 acres south-east of riverside Richmond 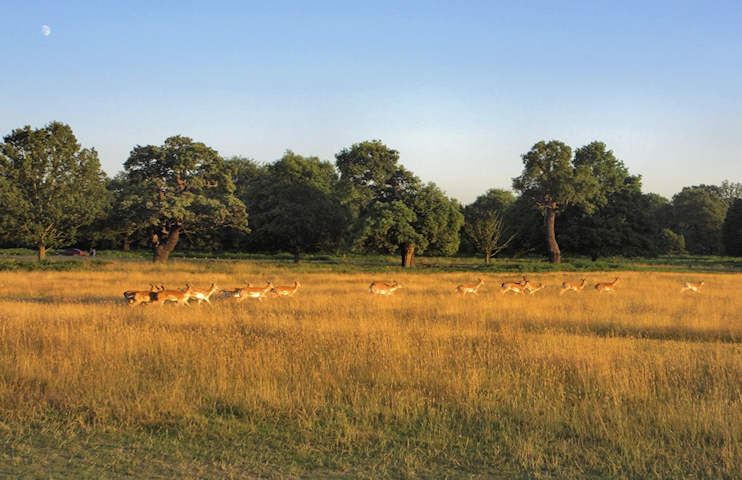 Charles I created this park in 1637, ordering its brick-walled enclosure so that he might hunt deer. The act was immensely unpopular with local people, even though the king allowed them to walk and to gather firewood here – a right that still exists. When Charles was beheaded, Parlia­ment granted the park to the City of London, which prudently restored it to Charles II on his enthronement.

In 1751 Princess Amelia took up residence in the White Lodge (built as a retreat for her father, George II) and excluded the public from the park until the courts over­turned the ban seven years later. Viscount Sidmouth – in his role as Deputy Ranger – intro­duced a series of plan­ta­tions from 1819 onwards, prin­ci­pally of oak trees, but also Spanish chestnut, beech, hornbeam, sycamore and larch.

As a result of public pressure Edward VII disbanded the Royal Hunt and opened the park to the public in March 1904.

George V granted permis­sion for the park’s eastern section to be turned into a golf course, on the under­standing that it was for ‘artisans’; who could not afford member­ship of a private club. The course opened in 1923 and was followed by another two years later.

There are now more than a dozen woods, the most beautiful of which is the 42-acre Isabella Plan­ta­tion, exten­sively replanted with erica­cious shrubs in the 1950s and 60s. Sidmouth Wood has become a bird sanctuary; over a hundred different species have been recorded throughout the park, and pheasant and partridge are arti­fi­cially raised. Richmond Park has several hundred fallow and red deer, and a wide variety of woodland wildlife including badgers and foxes – although the official mole-catcher has been made redundant. Sheep ceased to be grazed in 1980. At the centre of the park are the Pen Ponds, where coarse fishing is allowed by permit.

The White Lodge, which has been occupied by a succes­sion of princes and princesses, now belongs to the Royal Ballet school. Pembroke Lodge was the home of Lord Russell, the Prime Minister, and his grandson, Bertrand Russell, the philoso­pher. Princess Alexandra lives at Thatched House Lodge, which, in its present form, is largely the work of Sir John Soane.