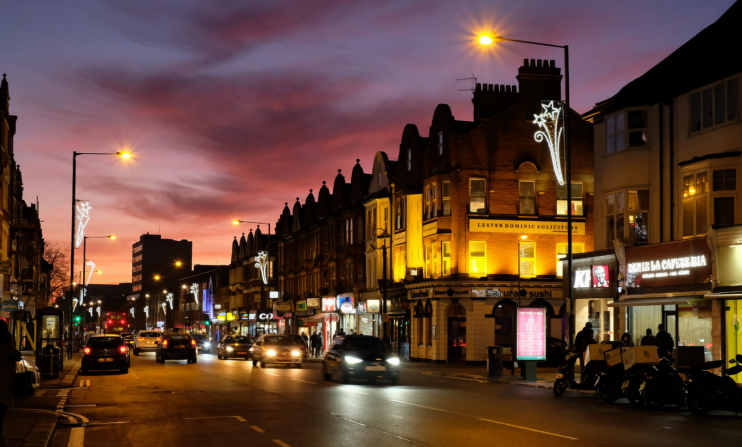 This was an important medieval thor­ough­fare, named after a family who were living here in 1263. It was orig­i­nally called Over­street, contrasting it with Nether Street, which ran in parallel to the west. The estate of Ballards Reding, later Wimbush Farm, stretched across to Fallow Corner.

By the 15th century large houses set in spacious grounds were appearing along the lane. Many of these prop­er­ties were rebuilt in the 17th century.

With the construc­tion of Regent’s Park Road the lane became a turnpike in 1826 and was extended to a new junction with the Great North Road, bringing an increase in devel­op­ment. By 1851 the lane had 56 houses and seven under construc­tion, which was posi­tively heaving for such a rural outpost of London at this time, and made it the most populous part of Finchley.

Most of Ballards Lane was rebuilt again from the early years of the 20th century onwards, much of it with parades of shops and flats.

The surrounding area has become popular with London’s Japanese community and Ballards Lane has several suppliers of goods and services targeted at this market.

* The picture entitled Sunset on Ballards Lane on this page is adapted from an original photograph, copyright Martin Addison, at Geograph Britain and Ireland, made available under the Attribution-ShareAlike 2.0 Generic Licence. Any subsequent reuse is hereby freely permitted under the terms of that licence.