The primary commercial – and would-be cultural – centre of Finchley, linked to its Church End by Ballards Lane 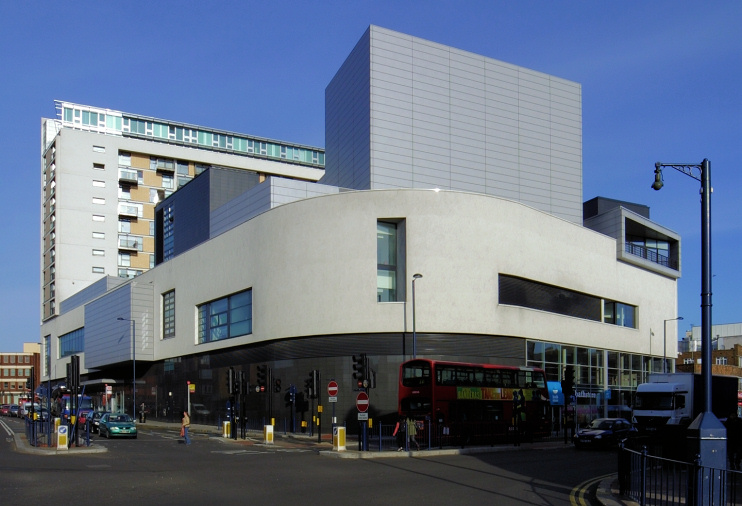 From the late 15th century this was an isolated spot called North End and there are no records of perma­nently inhabited dwellings here until the early 19th century, although the common land was occa­sion­ally used for troop encampments.

The common was enclosed in 1816 and Ballards Lane was extended here to meet the Great North Road, now the High Road, in 1826. From around this time a London–Birmingham stage­coach called the Tally Ho stopped here to change horses, giving its name to the junction.

By the late 1830s Tally Ho Corner had a cluster of dwellings, a chapel and the Torrington public house. A handful of artisans, including a female black­smith, were based on Lodge Lane. A horse-drawn omnibus service ran from the Torrington to Charing Cross by 1851.

Finchley and North End began to coalesce after the opening of stations at Finchley (now Finchley Central) in 1867 and Torrington Park (now Woodside Park) in 1872, where­after the village came to be known as North Finchley.

Christ Church and the Park Hotel were built in the late 1860s. North Finchley Board School (now Northside) opened in 1884 and new middle-class resi­den­tial streets began to branch off the High Road.

The intro­duc­tion of trams in 1905 brought further growth and shops soon lined this section of the High Road in an unbroken continuum. By the outbreak of the First World War, North Finchley offered leisure attrac­tions too, including an ice rink and two cinemas.

Between the wars the Tally Ho public house (shown in the small photo) replaced the Park Hotel, several major retailers built imposing stores and an Odeon (later Gaumont) cinema opened in 1939. All this commer­cialism dragged the neigh­bour­hood down a little and flats replaced some larger old houses.

Some of the biggest retailers have since moved away but Barnet council still considers North Finchley one of its three major town centres, along with Chipping Barnet (as it calls it) and Edgware.

The Gaumont closed in 1979 and Artsdepot has been built on its site. In addition to the arts centre, the devel­op­ment (which is shown in the photo at the top of this article) includes flats, a health and fitness centre, a bus inter­change and more shops.

With assis­tance from the Outer London Fund, Barnet council oversaw further invest­ment in North Finchley in 2013–14, with the aims of attracting more people to its cafés, restau­rants and shops and – perhaps a little opti­misti­cally – making the locality ‘a cultural destination’.

In May 2016 JD Wether­spoon announced its intention to sell the Tally Ho public house as part of a nation­wide cull of its (presum­ably under­per­forming) premises. It was bought by the Stonegate Pub Company.

North Finchley has been home to a roll call of British comic talent: Spike Milligan lived in Holden Road, Eric Morecambe in Torrington Park and David Jason in Lodge Lane. Jason attended Northside School from the ages of five to fifteen, and opened the newly refurbished school in 2002.