A ‘high-class’ neighbourhood, as its creators called it, situated north of Raynes Park in west Wimbledon 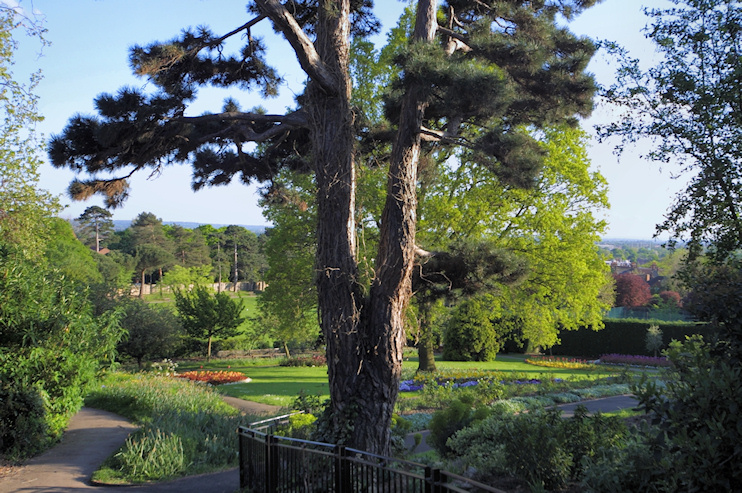 Prospect Place was a grand mansion built on Copse Hill in the mid-18th century by a London goldsmith, with grounds that were later improved by Humphry Repton. When devel­opers bought part of the Prospect Place estate in 1851 they named it Cottenham Park after former owner Charles Pepys, 1st Earl of Cottenham (1781–1851), who served two terms as Lord Chan­cellor. Cottenham is a village in Cambridgeshire.

New roads were laid out and given aris­to­cratic names that had asso­ci­a­tions with the estate. But only a few large houses were constructed, with their frontages at least 30 feet from the road. It was not until the interwar period that most of the area was built up, and the orchards and piggeries of Cottenham Park Farm survived until around this time.

St Matthew’s church was completed in 1927, although services had been conducted in the east part of the structure from 1909. The church was destroyed by a flying bomb in 1944 and rebuilt in 1958.

Several public spaces enhance Cottenham Park: allot­ments, a recre­ation ground and Holland Garden (shown in the photo­graph above), which was opened in 1929 in memory of Sir Arthur Holland, a former Wimbledon bene­factor and president of Wimbledon FC. The Holland family house, Holmhurst (now demol­ished), was located at the top of the hill, near Westside tennis club. Holland Garden had been a plot of family land that included an orchard, kitchen garden and paddock.