To some an enduring community, to others an ‘underwhelming commuter suburb’, situated one-and-a-half miles south-west of Wimbledon 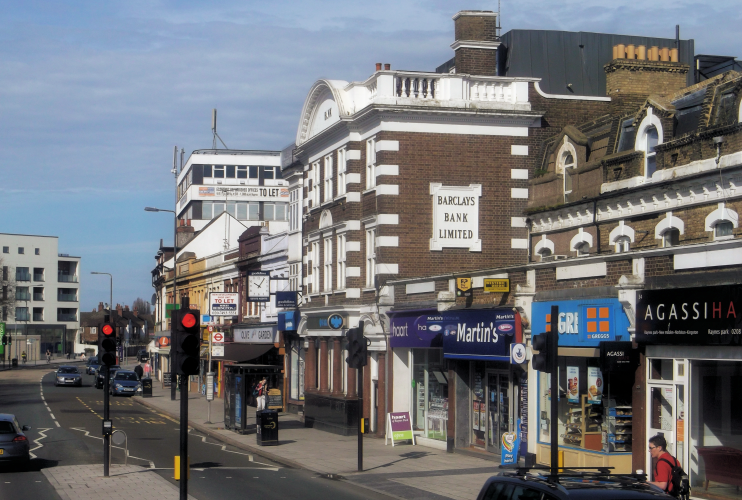 Archae­o­log­ical digs have revealed evidence of Bronze Age human activity and the summer grazing of livestock, but not of contin­uous habi­ta­tion at that time, which is under­stand­able given the propen­sity of the low-lying clay terrain to flooding – a vulner­a­bility that persists to the present day. Remnants of Romano-British pottery and tiles and medieval roof tiles indicate that the area may have been inhabited for the past 2,000 years or so – though very sparsely for most of that time.

Edward Rayne owned and managed Park House Farm from 1822, dividing the land into three ‘parks’: for pasturing sheep and cows, for growing peas, turnips and swedes, and for producing hay for local horses. After his sudden death in 1847, Rayne’s widow retained the farm until her son’s financial misman­age­ment forced her to sell to the lord of the manor of Morden, Richard Garth, in 1867.

Garth laid out Grand Drive and in 1871 funded the opening of a station, named after the farm’s former owner. Poor market condi­tions restricted property sales, so Garth leased some of the land as playing fields and a golf course.

A few shops and houses were built in the 1880s, but it was not until the extension of Wimbledon’s Worple Road to Raynes Park in 1891 that growth began to pick up and two shopping parades were built opposite the station. Never­the­less, it was several decades before the area was fully built up, despite the construc­tion of the Raynes Park Tavern (shown below) in 1904 and the arrival of tram services in 1907. 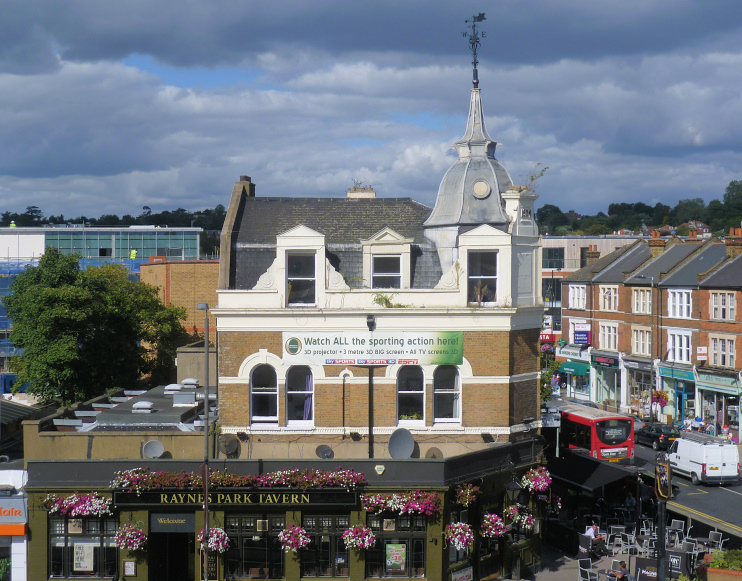 With plenty of space still available for non-resi­den­tial purposes, Carters Tested Seeds purchased 19 acres west of West Barnes Lane in 1909 and built a large complex of labo­ra­to­ries, offices and workshops. (Carters really did test their seeds.)

The largest of the area’s spec­u­la­tive devel­opers was George Blay, who bought the Cannon Hill estate in 1924 and obtained a govern­ment subsidy to build freehold houses. Firstway was the first road he laid out, followed by an extensive series of other ‘ways’. The former golf course that lay west of Grand Drive is remem­bered in the names Greenway, Fairway and Linkway.

Raynes Park county school for boys opened in 1935 and has since become Raynes Park high school, a mixed comprehensive.

Carter’s left Raynes Park in 1966 and the council acquired the site for housing, laying out streets with names ending in ‘Gardens’. Remark­ably, that was the last time Raynes Park expe­ri­enced anything approaching radical rede­vel­op­ment – making this one of the most unchanging places in a rapidly evolving metrop­olis. There are no abandoned hospitals ripe for conver­sion to luxury apart­ments (unlike in Copse Hill to the north) nor neglected estates of council flats to knock down and rebuild. With few brown­field sites, there has been – and is scope for – very little new construc­tion beyond the occa­sional private road (like Greenview Drive), a budget hotel above the Co-op or a rebuilt library or two with some flats on top.

Some newcomers have arrived from far-flung places like South Africa, Sri Lanka and South Korea but the demo­graphic profile and popu­la­tion density remain much the same as they were ten or twenty years ago – certainly compared with most other parts of built-up London.

The Jeff Beck Group’s 1971 album Rough and Ready includes the jazz-fusion instrumental ‘Raynes Park Blues’, alternatively titled ‘Max’s Tune’, in a reference to keyboard player Max Middleton, who wrote the piece while he was living in the area.

The map above shows Goals Wimbledon, Tesco’s New Malden Extra store and Raynes Park high school, all within a stone’s throw of each other. In amongst these, there’s also World of Golf at Beverley Park and Krispy Kreme doughnuts at Shannon Corner, “a place that isn’t really a place,” as one reviewer has observed. Sometimes it’s hard to know where you are in London.

* The picture of the Coombe Lane shops, Raynes Park, at the top of this page is adapted from an original photograph, copyright David Anstiss, and the picture of the Raynes Park Tavern is adapted from an original photograph, copyright Marathon, both at Geograph Britain and Ireland, made available under the Attribution-ShareAlike 2.0 Generic Licence. Any subsequent reuse is hereby freely permitted under the terms of that licence.