A compact set of terraces for the upwardly mobile, situated between Raynes Park and Wimbledon Chase stations 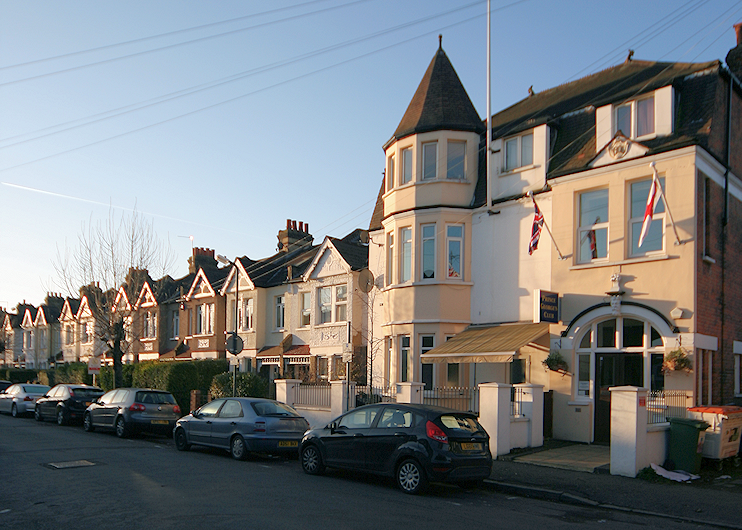 From the early 1890s suburban houses began to appear on Kingston Road – and around the turn of the century streets started to sprout south­wards, starting with Chestnut Road (spelt Chesnut Road on early maps, probably erro­neously) and Bronson Road and then proceeding steadily westwards across a former cricket ground.

As construc­tion progressed, styles became grander – and the more ambitious prop­er­ties were given bay windows and deco­ra­tive flour­ishes. Although all terraced, the houses have been described as “really aiming to be miniature Victorian villas.” They had small front gardens with railings and privet hedges, while the avenues came to be mostly tree-lined.

The twelve parallel streets were all in existence by 1907, although their comple­tion took longer as they were gradually extended south to reach the newly created Bushey Road. (Several streets never quite completed the connec­tion, except for a footpath, and final houses have been tacked on to the terraces rela­tively recently.)

Approach Road was added in 1913, linking Kingston Road to Grand Drive and thence to Bushey Road. Several builders had a hand in the estate’s devel­op­ment but the largest part­ner­ship was that of local auctioneer and surveyor PJ Dixon and his brother, who main­tained a manage­ment office on Approach Road. Devel­op­ment of the Bushey Mead estate was effec­tively complete by 1920 – though some houses near Kingston Road had to be replaced after Second World War bombing.

Part of the estate was built on land that had belonged to the parish vestry and had once been known as Poors Wood. This name clearly lacked social cachet so Bushey Mead was conceived. It derived from Bushey Meadows, the fields that lay to the south. 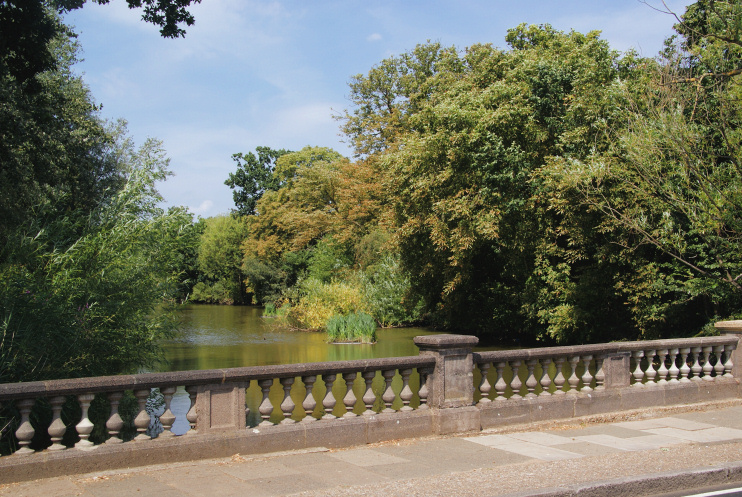 In his auto­bi­o­graph­ical work Something in Linoleum: A Thirties Education, Paul Vaughan says that Bushey Mead was a 19th-century name for Cannon Hill lake (shown in the photo above) – but Hidden London can find no corrob­o­ra­tion for this assertion, and it would be unusual to call a lake a ‘mead’ (other than Lake Mead, which is quite a different matter) as the word is an archaic or poetic term for a meadow.

Whatever the truth of the lake’s appel­la­tion, cartog­ra­phers have moved the local­i­ty’s label further and further south over the decades, so that on some maps Bushey Mead now appears to take in most or all of Cannon Hill. Often in such cases, what begins as a miscon­cep­tion can end up as the way it is. Future updates of this article may therefore acquiesce in treating Bushey Mead as a much bigger place than has been discussed above.

In their early years, the streets of Bushey Mead were popularly referred to as the [Twelve] Apostles, a nickname said to have been invented by visiting district nurses. The name is still used by the local residents’ association.

* The picture of the lake at Cannon Hill Common on this page is adapted from an original photograph, copyright Bill Boaden, at Geograph Britain and Ireland, made available under the Attribution-ShareAlike 2.0 Generic Licence. Any subsequent reuse is hereby freely permitted under the terms of that licence.