The green and pleasant south-eastern corner of Raynes Park, some of which lies above the 70 foot contour – about 30 feet higher than most of its surroundings 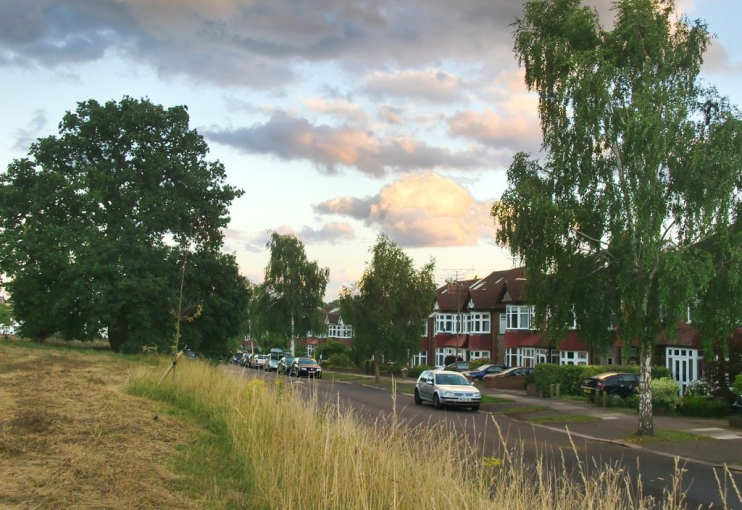 For centuries this was part of the ‘waste’ land of Merton manor, wild and uncul­ti­vated. When the canons of Merton Priory acquired the manor in 1121, they set about improving the land and even­tu­ally sold it for farming.

In 1763 William Taylor built Cannon Hill House, an impres­sive stuccoed mansion with surrounding parkland adjoining Cannon Hill Farm. A City busi­nessman, Richard Thornton, bought the estate in 1832 and lived in the house until his death in 1865.

Edward Rayne, meanwhile, acquired most of the neigh­bouring farmland as part of his West Barnes estate. Thornton left over £3 million in his will, the largest fortune of his times, which was progres­sively dissi­pated throughout an ever-extending family. The Cannon Hill estate remained in the hands of the executors until the First World War. The grounds continued to be used by the Thornton family for game shooting, while the house became dilap­i­dated and had to be demolished.

In the 1920s the council built the pleasing Whatley and Cannon Hill estates, while builder George Blay laid out a series of roads, including those branching off Grand Drive, and followed this with devel­op­ments around Cannon Hill Lane during the 1930s. Blay’s prop­er­ties were mostly afford­able but well-propor­tioned terraced houses supported by council subsidies, some for sale and others to let.

With the co-operation of Blay and the council, and the generosity of bene­fac­tors – notably Joseph Hood MP – much of Cannon Hill was saved from devel­op­ment and remains open space. Cannon Hill Common was opened as a park in 1927, and has a central area desig­nated a wildlife reserve.

According to the 2001 census, the typical Cannon Hill resident is likely to be a white, married owner-occupier who is a little older than the average Londoner.

* The photograph of Parkway, SW20 at the top of this page is adapted from an original photograph, copyright Stefan Czapski, at Geograph Britain and Ireland, made available under the Attribution-ShareAlike 2.0 Generic Licence. Any subsequent reuse is hereby freely permitted under the terms of that licence.