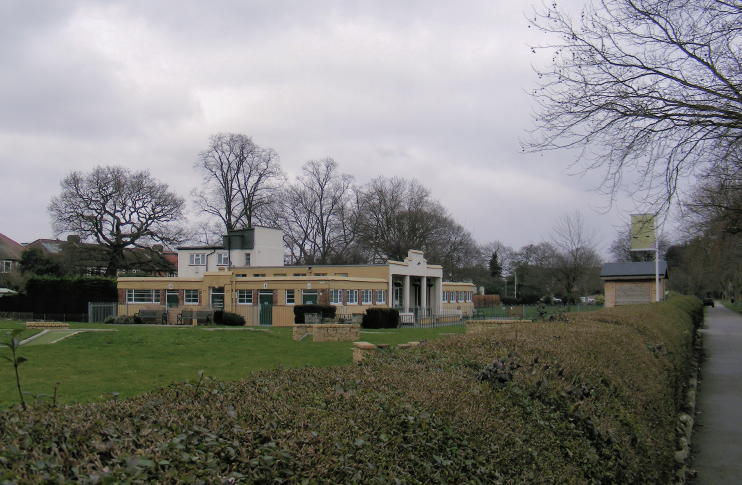 The Mot family lived in this area in the 14th century and gave their name to a farm that lay west of the Beverley Brook. In 1627 the farm was called Motes Firs, a reference to the furze (gorse) that grew round about. It had become Motts Spur Farm by 1823, and was later Mosper Farm. The map below is centred on the site of the farmhouse (which survived into the 1960s).

The railway line ran through the district in 1859 but no halt was provided here and only a few villas had appeared by the early 20th century.

Motspur Park station finally opened in July 1925. Built on the other side of the Beverley Brook from Mosper Farm (and the land to its south that was by then called Motspur Park), the station was actually located at the southern tip of West Barnes – but the Southern Railway may have chosen not to use that name because of possible confusion with the better-known Barnes, five miles to the north. The locality of Motspur Park has almost entirely eclipsed West Barnes as a conse­quence of the railway company’s decision.

The opening of the station and the construc­tion of the Kingston bypass stim­u­lated a construc­tion boom in the second half of the 1920s and on into the 1930s, with a multi­plicity of minor builders putting up terraces of three-bedroom houses. New bus services were laid on and parades of shops were built, along with the Earl Beatty public house.

Between 1927 and 1937 the number of season tickets sold at the station increased more than tenfold. The acces­si­bility of Motspur Park prompted some London insti­tu­tions to create sports grounds here, which have since been protected from development.

At the Univer­sity of London’s athletics ground, several world records were broken in the years before and after the Second World War. In 1999 the univer­sity sold the ground to Fulham football club, for use as a training centre and a base for 150 staff.

At the time of writing, the site of the BBC’s former sports club has lain vacant for more than a decade. Proposals to develop either a leisure centre, cemetery or primary school here have not come to fruition.

East of the Beverley Brook (which nowadays forms the boundary here between the boroughs of Kingston upon Thames and Merton), the Sir Joseph Hood memorial playing field has public sports facil­i­ties, a nature reserve and a pavilion (shown in the photo­graph at the top of the page*) with a café.

Motspur Park provided the backdrop for Brush Strokes, a television comedy series about an amorous painter and decorator, which ran for five series between 1986 and 1991.

* The picture of the Pavilion at Sir Joseph Hood Memorial Playing Field at the top of this page is adapted from an original photograph, copyright AGC, at Geograph Britain and Ireland, made available under the Attribution-ShareAlike 2.0 Generic Licence. Any subsequent reuse is freely permitted under the terms of that licence.