A hotch-potch of interwar semi-detached houses and council tower blocks and terraced houses constituting the north-western corner of Hanwell, on its border with Greenford 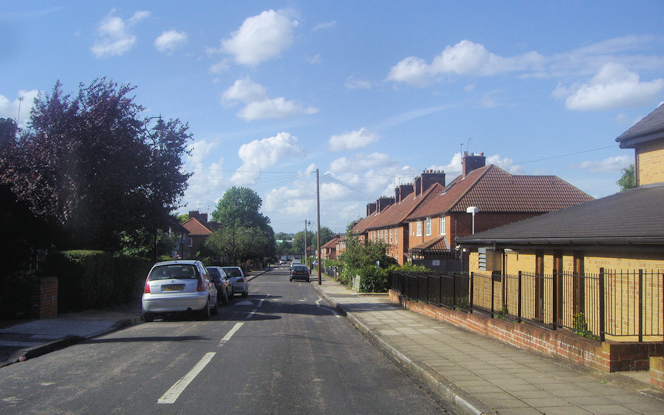 Elthorne was a hundred, a medieval admin­is­tra­tive division that took in Hanwell, Greenford, Harmondsworth and West Drayton. Elthorne Heights was earlier consid­ered a more pres­ti­gious name than that of Hanwell, but is now little used.

This was the last part of Hanwell to be built up, and was saved from overde­vel­op­ment by the opening of the Brent Valley golf club around 1910. Soon after­wards devel­opers laid out Studland Road and the streets to its north and almost all the available building land was filled by 1935.

The borough council took over the golf club in 1938 and it became a public course. Elsewhere, the river’s border has been preserved as part of Brent Valley Park.

Mayfield primary school on High Lane is a popular school with a cultur­ally diverse intake. To the north-west and east of the locality there are too many schools to name them all, espe­cially as some of their names are very long – e.g. Our Lady of the Visi­ta­tion Catholic primary school and École André Malraux (Lycée Français Charles de Gaulle de Londres).

* The picture of Hillyard Road, Elthorne Heights, on this page is adapted from an original photograph, copyright David Howard, at Geograph Britain and Ireland, made available under the Attribution-ShareAlike 2.0 Generic Licence. Any subsequent reuse is hereby freely permitted under the terms of that licence.