A likeable west London suburb, connected with Ealing to its east via the Uxbridge Road 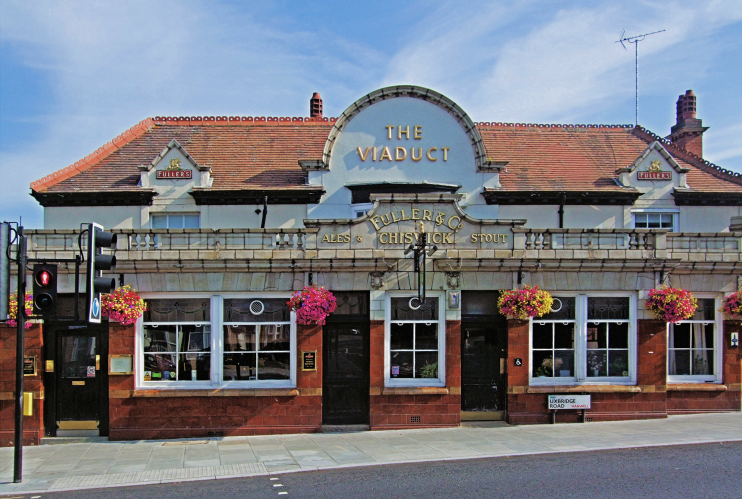 Hanwell’s name probably refers to a stream (weille) frequented by cocks (hana). Fifth- and sixth-century Saxon graves have been discov­ered where Oaklands school now stands. By the time of Domesday Book, Hanwell belonged to West­min­ster Abbey.

St Mary’s church was in existence by the twelfth century but has since been rebuilt three times. Buried in the crypt of the church is the merchant and travel writer Jonas Hanway, who intro­duced the umbrella to England in the 1750s.

The last of the open land in Hanwell was enclosed in 1816 and several terraces of houses appeared during the following decade. Hanwell Lunatic Asylum (later St Bernard’s Hospital) opened on the Southall border in 1831 and, after early diffi­cul­ties, subse­quently gained a repu­ta­tion for the humane treatment of its patients.

In 1836 Isambard Kingdom Brunel built the Wharn­cliffe viaduct for the Great Western Railway and Hanwell station opened two years later. An oft-repeated story has it that Queen Victoria used to halt the royal train on the viaduct so that she could admire the view towards St Mary’s.

Shown in the photo­graph at the top,* the Coach and Horses inn changed its name to the Viaduct after the coming of the railway. The building is almost impos­sible to date now, because it’s been altered so much on so many separate occasions, but its origins may be early Georgian while its tiled frontage is Edwardian.

Only a few more homes were built following the creation of this early link to London and the main increase in Hanwell’s popu­la­tion derived from the construc­tion in 1856 of the Central London district school, near present-day Castle Bar Park station.

Hanwell’s two ceme­teries, flanking Uxbridge Road, were estab­lished in the 1850s, for the burial of Londoners from Kens­ington and Westminster.

In the 1870s the viaduct was widened, the station was rebuilt and a full commuter service was laid on for the first time in response to growing demand. Hanwell became an urban district in 1895 and began to expand rapidly with the arrival of electric trams in 1901 but the district was absorbed by Ealing in 1926.

In the 1930s the London County Council built the Cuckoo estate on the site of the Central London district school, but the school’s imposing main building survives as Hanwell community centre (shown in the photo­graph on the right*).

Terraced and semi-detached houses and other council flats filled most of the remaining land – and replaced earlier houses – in the years between the wars, although generous open spaces have been preserved in the Brent valley.

Contem­po­rary Hanwell has a growing popu­la­tion of youngish profes­sionals, espe­cially in the southern part, and a variety of bars and restau­rants to serve them. The popu­la­tion is mainly white, with a broad cross-section of ethnic minorities.

Streets north-east of the station are named after English poets, so estate agents have tritely called it ‘Poets’ Corner’ despite potential confusion with another Poets’ Corner not far away in Acton.

In 1962 Jim Marshall – ‘the Father of Loud’ – began making and selling his eponymous amplifiers at his music shop at 76 Uxbridge Road. Pete Townshend, Ronnie Wood, Eric Clapton and Jimi Hendrix were among the artists who bought their amps in Hanwell.

In the late 1960s Hanwell community centre provided rehearsal rooms for the rock bands Uriah Heep and Deep Purple. Much of the album Deep Purple in Rock was composed here in 1969.

* The picture of the Viaduct pub at the top of this page is slightly modified from an original photograph, copyright Jim Linwood, at Flickr, made available under the Attribution 2.0 Generic licence and the picture of Hanwell Community Centre is adapted from an original photograph, copyright J Taylor, at Geograph Britain and Ireland, made available under the Attribution-ShareAlike 2.0 Generic licence. Any subsequent reuse is hereby freely permitted under the terms of those licences.