Although umbrellas were used in ancient China, Babylon, Egypt and elsewhere, they were not commonly found in England until the early 18th century, when they consid­ered suitable only for women, though they were cumber­some contrap­tions in those days, and very heavy – espe­cially when their oiled silk covers were wet. Nowadays, even the most tradi­tional looking umbrellas tend to have nylon covers.

Jonas Hanway publi­cised masculine usage of the umbrella from about 1750 by carrying one regularly in the streets of London – and he incurred a good deal of ridicule in the process. Hackney carriage drivers would try to splash Hanway and hustle him to the kerb because they feared the umbrella’s detri­mental effect on their foul-weather trade. “The cabbies needn’t have worried” – avers Mark Easton in his delightful book, Britain etc. “– you can never find a taxi in the rain to this day – even though the umbrella has become a ubiq­ui­tous feature of national life. It is seen as repre­sen­ta­tive of British fasci­na­tion with the whimsy of the weather and emblem­atic of the country’s character.”

In 1830 James Smith opened London’s first dedicated umbrella (and stick) shop, on the west side of Soho in Foubert’s Place, a thor­ough­fare named after Major Foubert’s military academy and riding school, which had stood here for about a century from the 1680s. When the brolly business in Foubert’s Place outgrew its cramped premises, Smith’s son, also called James, opened new shops off Savile Row and in New Oxford Street, in St Giles. The former was demol­ished to make way for a new road and relocated to New Burlington Street, where it prospered until its destruc­tion in the Second World War. The New Oxford Street store survives to this day, with its original brass and mahogany shop front and interior fittings.

In an age where cheap umbrellas abound – and often don’t survive the first sharp gust of wind – James Smith’s devotion to quality is admirable, though prices are corre­spond­ingly high. (You may need to save for a rainy day.) Many of the umbrellas and walking sticks are made in the basement of the New Oxford Street premises, but demand outstrips the capacity of this little workshop so produc­tion is also commis­sioned from other small family firms.

“It is inad­vis­able to lend your James Smith umbrella to even your closest friend,” the shop­keepers porten­tously advise. “Give them our address instead.” It’s 53 New Oxford Street. 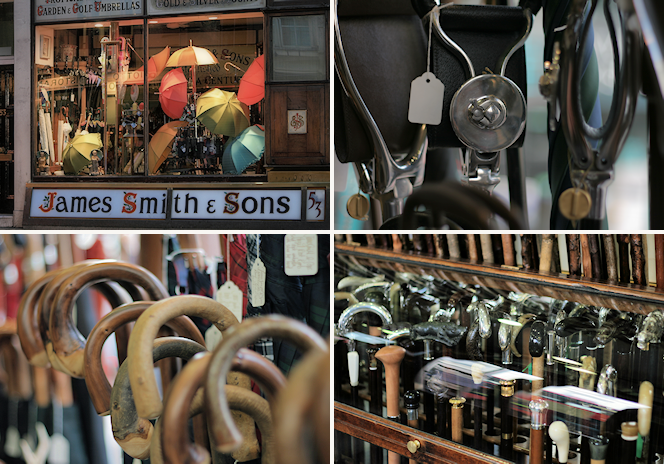