A northern satellite of Cudham, located halfway along the lane to Green Street Green 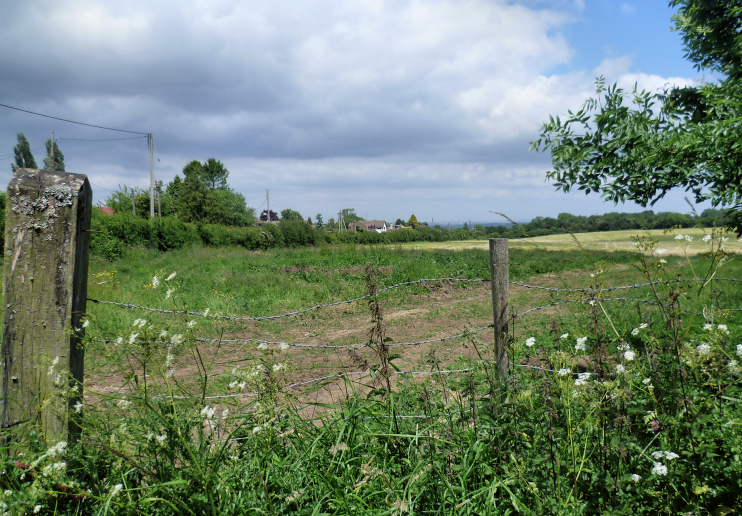 Hazel­wood’s name dates back more than half a millen­nium: a Geoffrey de Hasilwode was recorded as living here­abouts in 1485. By London standards, Hazelwood is a very isolated community, mainly consisting of detached houses and bungalows built along a handful of unmetalled private roads and surrounded by green-belt farmland.

Here in the foothills of the North Downs, the terrain rises fairly steeply (again, by London standards). Cudham Lane North ascends by almost 200 feet (61m) between the top and bottom of the map below, reaching 568 feet (173m) above sea level at its junction with Mace Lane.

The elongated, coppiced wood that gives the locality its name is situated just to the west and extends south­wards into a section called Lordfield Shaw. The chalk grassland is rich in ground flora, including toothwort and spurge-laurel.

The most notable event in Hazel­wood’s history was the shooting down in flames of squadron leader Thomas Gleave’s Hawker Hurricane fighter during the Battle of Britain. The plane crashed near Mace Farm. Gleave baled out and survived but was horribly burned. He was taken to Orpington hospital and then to a specialist burns unit at East Grinstead where he underwent pioneering plastic surgery. A year later Gleave returned to active service and subse­quently played a key role in planning the allied invasion of Normandy.

Amateur astronomers like to set up their telescopes at Hazelwood because it has one of the lowest levels of light pollution in the London area.