The prominent signposting suggests a major settlement but High Elms is not a town – it’s a collection of rural amenities set in almost a thousand acres of parkland, woods and fields south of Farnborough 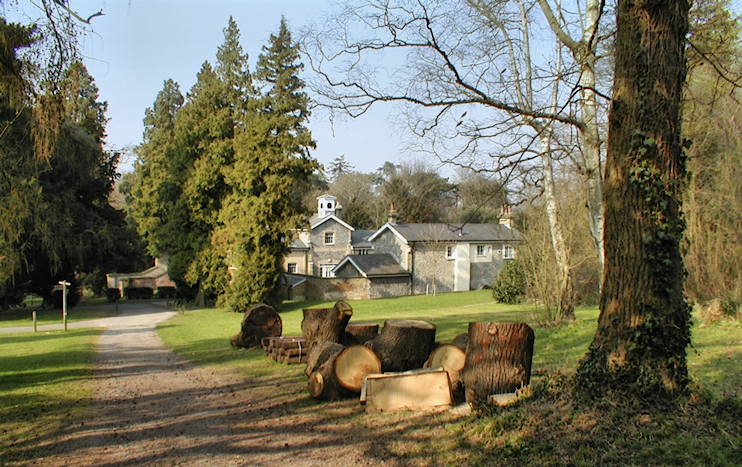 Over the course of the 19th century the High Elms estate was acquired by one John William Lubbock (in 1808) and then descended through a nephew and two sons, all bearing the exact same name. The succes­sive John William Lubbocks added several new struc­tures, including an Ital­ianate mansion, a game­keep­er’s lodge, a granary and other farm buildings. The Lubbocks also extended and land­scaped the grounds of their home and for a while they operated a race­course here.

The third John William Lubbock was a math­e­mati­cian and astronomer who developed a method for calcu­lating the orbits of comets and planets. His son, who was made the first Baron Avebury in 1900, was also a scientist – but perhaps his greatest accom­plish­ment was to introduce bank holidays when he was a reforming member of Parlia­ment. A bank holiday was once dubbed ‘St Lubbock’s Day’.

The estate was sold to Kent County Council in 1938, with High Elms mansion serving as a nurses’ training centre for many years. On its inception in 1965 the London Borough of Bromley took over the estate and converted Clock­house Farm’s 150 acres into an 18-hole public golf course.

The 27-bedroom High Elms mansion burned down in 1967, iron­i­cally on August bank holiday Monday. Its former site is now occupied by the golf clubhouse.

Much of the High Elms estate is a country park and nature reserve open to the public and managed by Bromley council. It’s situated south of Shire Lane on High Elms Road, which leads to Downe. There’s an envi­ron­mental education centre (with limited opening times), an old ice well and an Eton fives court. The Green Roof Café is open daily.

Although Dutch elm disease and the great storm of 1987 took their toll, the park is still rich in a variety of trees planted by the Lubbocks (latterly taking advice on arboreal selection from their friend and neighbour Charles Darwin) and subse­quently by the Forestry Commis­sion and Bromley council.