A suburban village situated on the edge of larch woods and open country, at the south-western extremity of Orpington’s sprawl 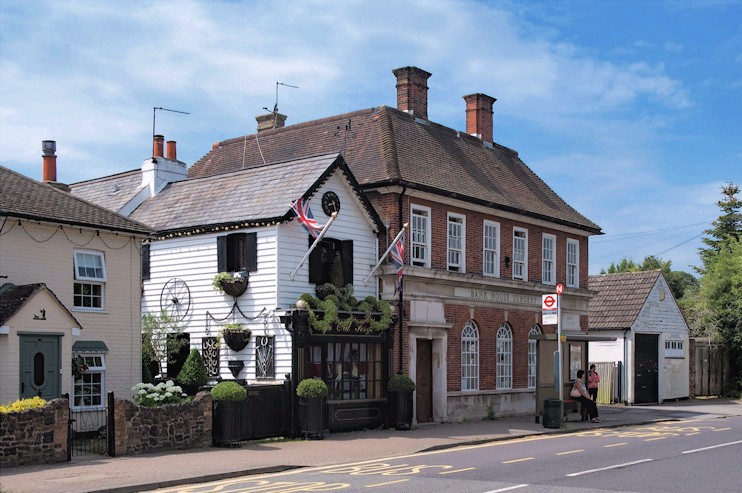 In 862 an Anglo-Saxon charter describing the bounds of Bromley iden­ti­fied Fearn­biorginga mearc – ‘the boundary of the people of Farn­bor­ough’. The place’s name derived from the Old English words fearn and beorg, referring to a small hill overgrown with ferns. It was written as Feren­berga in 1180 and Farnberg in 1226. In Fearn­biorginga the -inga part meant ‘dwellers at’.

The manor of Farn­bor­ough belonged to the Duchy of Lancaster “from the first erection of it,” as Edward Hasted put it in his History of Kent (1797). The powerful Simon de Montfort leased Farn­bor­ough Hall to Simon de Chels­field in the mid-13th century.

In 1639 a great storm destroyed the church of St Giles the Abbot, which had to be rebuilt from scratch. Vestry records depict an active community in the 18th century, with plenty of takers for rewards that were offered for badgers’ heads and the carcasses of foxes, polecats and hedgehogs.

In 1845 Bromley board of guardians built a union workhouse at Locks­bottom. It subse­quently evolved into Farn­bor­ough hospital, now Princess Royal univer­sity hospital, which is part of King’s College hospital foun­da­tion trust.

Like Downe and Green Street Green, Farn­bor­ough was popular with walkers and cyclists in the early 20th century and refresh­ment rooms abounded.

The pretty village began to succumb to suburban devel­op­ment after the First World War, bringing about the frag­men­ta­tion of the area’s long-estab­lished Gypsy community. When Urania Boswell, the queen of Kent’s Gypsies, died in 1933 a crowd of 15,000 turned out to watch her funeral proces­sion. Also known as Gypsy Lee, she was buried in St Giles’ churchyard.

After the Second World War the area north of the High Street filled with housing, but green-belt legis­la­tion prevented building further south. The devel­op­ments included Darrick Wood, which is now Keniston Housing Association’s largest estate, with around 360 houses and flats, and sheltered accom­mo­da­tion for the elderly.

The Farn­bor­ough and Crofton ward has an above-average propor­tion of older people and the vast majority of residents are white. At Farn­bor­ough primary school very few pupils are from minority ethnic groups and a very small number are at the early stages of learning English. The school has been an academy within the Nexus Education Schools Trust since 2015.