The original heart of Chelsfield, situated a mile to the east of the ‘new’ Chelsfield that has grown up around the railway station 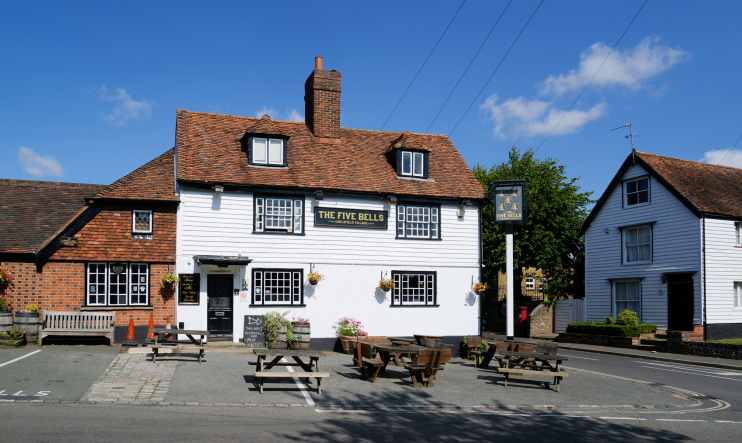 The name was recorded in Domesday Book as ‘Cilles­felle’, but tran­scrip­tion errors were common in that survey, and in the following year another document rendered it as ‘Chiles­feld’. The name may have indicated a ‘chilly field’, given the exposed nature of the high ground, but was more likely to have derived from ownership by a man called Cēol.

The church of St Martin of Tours is of early Norman origin, and was altered and enlarged in the 13th century.

In 1290 Otto de Grandison granted Chels­field a charter declaring that “there may be one market at my manor of Chels­field each week on Monday, and one fair each year, at the same, lasting three days.”

Several lanes converge on the village and drovers would stop here to obtain water for their livestock and ale for them­selves. Shown in 2014 in the photo above, the Five Bells public house takes its name from the unusual number of bells that the church used to have.

The present Court Lodge and its farm have stood near the church since at least the 18th century; in Kent, manor houses were often called ‘court lodge’ because manorial courts were held there. Fire destroyed many of the farm buildings in 1857, probably as a result of arson. Lord of the manor William Waring then built a new farmhouse nearby, renting the lodge and its garden to a succes­sion of London businessmen.

In 1928 the Orpington bypass divided the village from the church and Court Lodge, and some houses were built by the roadside. Had it not been for the inter­rup­tion of the Second World War and the subse­quent intro­duc­tion of green-belt legis­la­tion, the village would probably have been joined to Orpington by further development.

The church was restored in 1950 after wartime damage and has been well-main­tained since.

In the village itself, Victorian farm labourers’ cottages have been altered and gentri­fied but many prop­er­ties retain their rustic charm. The privately owned Chels­field Park Hospital on Bucks Cross Road has 50 beds, three theatres and an assisted concep­tion unit.

The novelist Miss Read (born Dora Shafe) moved from Hither Green to Chelsfield in 1921, at the age of seven. Her Fairacre books, although set in the Cotswolds, were based on her childhood experiences in the village, the village school and surrounding countryside.

Miss Read’s autobiographical Time Remembered (1986) portrays Chelsfield and its inhabitants in the 1920s.

Postcode area: Orpington BR6
Further reading: Geoffrey Copus, Chelsfield Chronicles: Annals of a Kentish Parish, CAT Designs, 2004
and Alan Cheesman, Chelsfield in from the Cold: A Guided Walk around Chelsfield (or Something like That), Celsfield Press, 2011