A linear residential locality bordering the road of the same name, stretching north-westwards away from Islington 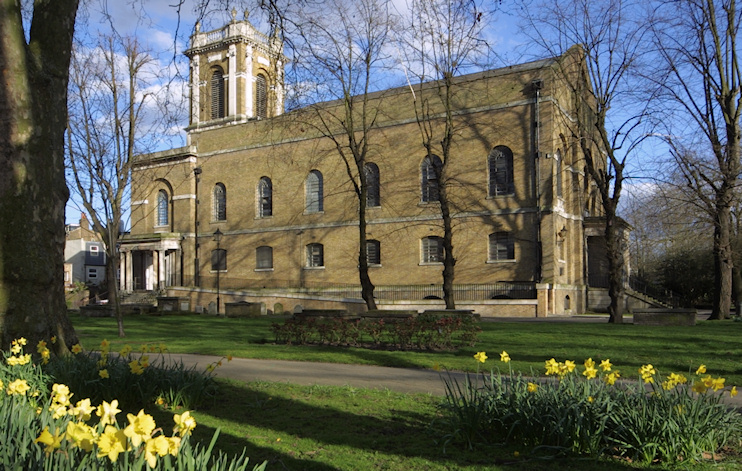 From the 14th century, ‘Le Holeweye in Iseldon’ [the road in a hollow in Islington] began to lend its name to the scattered collec­tion of dwellings along its length, dislodging the older manorial identity of Tollington.

By the 16th century, three distinct hamlets comprised the district: Upper Holloway, Lower Holloway and Ring Cross. The latter had grown up around the junction with what is now Hornsey Road and was later absorbed by Lower Holloway.

Dairy farms occupied most of the surrounding fields. Holloway was noted in the 18th century for the cheese­cakes produced on the farms and sold at local taverns.

By 1800 a few villas were appearing, together with some terraced housing in the south, but true suburban devel­op­ment did not begin until the 1840s. Freehold land societies inten­si­fied the house­building process from the 1850s.

Built in 1814 as a chapel of ease, St Mary Magdelene became Holloway Road’s parish church in 1894. It’s shown in the photo­graph above.

Holloway Prison opened in 1852 on a site that had previ­ously been set aside for the burial of cholera victims; the prison became exclu­sively a women’s jail around 1903. By this time the district was wholly built up, mostly with terraced houses – some of which were of substan­dard construc­tion – but with a few streets of detached and semi-detached houses set well back from the commer­cial hubbub of Holloway Road itself in the Nag’s Head locality.

From the early 20th century the borough and county councils knocked down houses and put up blocks of flats with increasing zeal until they were persuaded to desist in the 1970s. Almost half the homes in Holloway are rented from the council – one of the highest propor­tions in London.

Holloway provided a home for the fictional Charles Pooter in George and Weedon Grossmith’s Diary of a Nobody, which satirises the pretensions of a lowly Victorian clerk; 1 Pemberton Gardens is said to represent the precise location of ‘The Laurels, Brickfield Terrace’.

In Nick Hornby’s novel High Fidelity, the hard-to-find record shop is situated in an unidentified Holloway side street.