A bustling commercial zone situated around the junction of Seven Sisters Road with Holloway Road, regarded by Islington council as one of the borough’s two most important ‘town centres’ 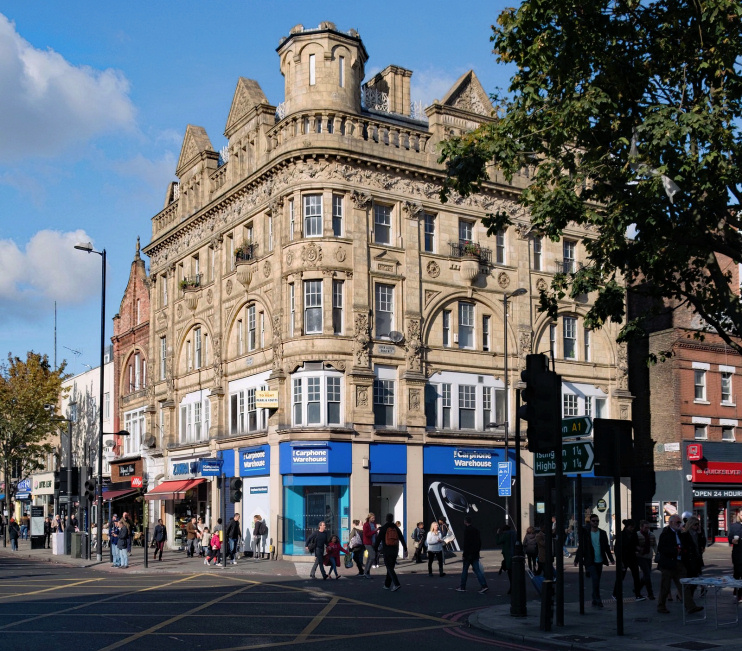 The locality is named after a public house that operated here for around 200 years.

For much of the 19th century, the Nag’s Head marked the edge of Islington’s northward spread and was the terminus for its first tramway in 1871. The vicinity soon became a focus for retailers serving the expanding middle-class community of Holloway and the pub was rebuilt in Ital­ianate style.

Shown in the photo above, the shops, offices – and perhaps also orig­i­nally flats – of Bathurst Mansions were built in 1891 on the north side of Holloway Road’s junction with Seven Sisters Road. The building is grade II listed and is partic­u­larly notable for the wealth of deco­ra­tive detailing on the light buff terra­cotta walls of the upper floors.

Despite the neighbourhood’s demo­graphic trans­for­ma­tion during the 20th century the Nag’s Head remained the borough’s largest shopping area until the 1990s, when it was overtaken by the Angel, which was more successful in attracting new invest­ment and drawing visitors from outside its immediate hinterland.

The Nag’s Head covered market opened on Seven Sisters Road in the mid-1970s. The small Nag’s Head shopping mall opened in 1992, anchored at the time by a Safeway super­market, now a Morrisons. The neigh­bouring section of Holloway Road nowadays has rela­tively few stores that might attract shoppers from further afield, with the notable exception of Selbys, Islington’s only remaining depart­ment store.

The west side of Holloway Road has a hall of residence for London Metro­pol­itan Univer­sity students and a lavish art deco cinema, opened as the Gaumont in 1938, and now an Odeon. The Nag’s Head itself spent its latter years as an Irish theme pub and has since become a ‘licensed family enter­tain­ment centre’.

The poet and painter Edward Lear, best known for his nonsense verse, was born at Bowman’s Lodge in 1812 and lived here until the age of 16. The lodge was named after an Elizabethan archery house and its site is now occupied by Bowman’s Mews.

* The picture of Bathurst Mansions, 1 Seven Sisters Road, Nags Head, at the top of this page is slightly modified from an original photograph, copyright Julian Osley, at Geograph Britain and Ireland, made available under the Attribution-ShareAlike 2.0 Generic Licence. Any subsequent reuse is freely permitted under the terms of that licence.