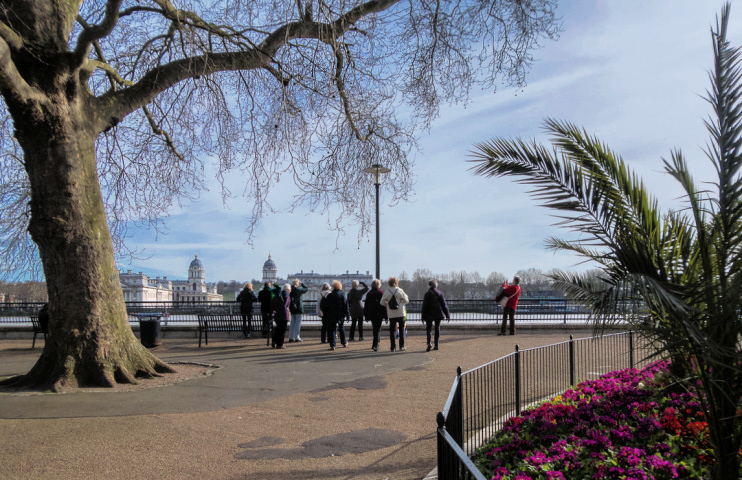 After William Cubitt had built up the south-eastern quarter of the Isle of Dogs he leased land from the Admiralty to put a handful of grand villas along the water­front here. To accompany these he commis­sioned a plan­ta­tion, with dozens of varieties of trees and shrubs. The ground was planted but the villa scheme was a failure; only two were built and one of these lasted fewer than ten years. The other survived into the twentieth century, even­tu­ally becoming a library.

The plan­ta­tion fell into neglect and by the 1880s it was derelict. In 1895 the London County Council created a park with walks, a play area, bandstand and a 700 foot terrace offering a superb view across the Thames to Greenwich.

The Millwall Extension Railway came here in 1872 and the station was named North Greenwich. The line carried some docks traffic as well as daytrip­pers who crossed to Greenwich by ferry. The ferry service was discon­tinued after the opening of the free foot tunnel in 1901.

The inception of omnibus services and the departure of Millwall football club from the island in 1910 impaired the railway’s viability and the station closed in 1926. It reopened in 1991 as Island Gardens, orig­i­nally the southern terminus of the DLR. The station was relocated under­ground in Millwall Park when the line was extended to Lewisham in 1999.

Tower Hamlets’ improve­ments to Island Gardens in the 1980s included a refresh­ment house with a big teapot and teacup in its brickwork.

* The picture of Island Gardens on this page is adapted from an original photograph, copyright Christine Matthews, at Geograph Britain and Ireland, made available under the Attribution-ShareAlike 2.0 Generic Licence. Any subsequent reuse is hereby freely permitted under the terms of that licence.