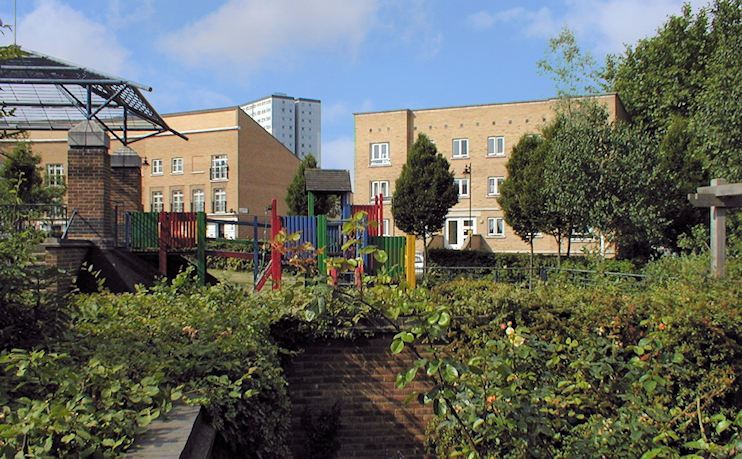 ‘Isledon’ is an old form of ‘Islington’, although the estate is simply named after the road on which it is located. The seven-acre site formerly consisted of indus­trial buildings beside the railway.

Shops and stalls on nearby Fonthill Road specialise in afford­able designer clothes and there were proposals to build a national fashion centre here. However, these were abandoned after Finsbury Park residents pressed for the site to be put a more locally oriented use.

Several housing asso­ci­a­tions collab­o­rated to build flats and maisonettes in 1994 and a second, smaller phase of modular town houses was completed in 1999.

Community facil­i­ties include a doctor’s surgery, a self-built nursery, work­spaces and open space with a children’s play area. A nursing home cares for elderly people and those with disabil­i­ties or mental health problems.

The village drew praise for its inte­grated approach to urban design. In The Buildings of England (London 4: North), Bridget Cherry writes, “The tall, flat-fronted three-storey terraces of two-storey houses with flats above and in the corner pavilions are equally urban in character, and display the inventive eclec­ti­cism char­ac­ter­istic of this firm [Hunt Thompson]. Neoclas­sical allusions but also picturesque variety intro­duced by monpoitch roofs and cut-away corners.” However, some critics disliked the ‘dead end’ layout.