A small park located at the apex of Upper Street and Essex Road, generally thought of as the centre of Islington 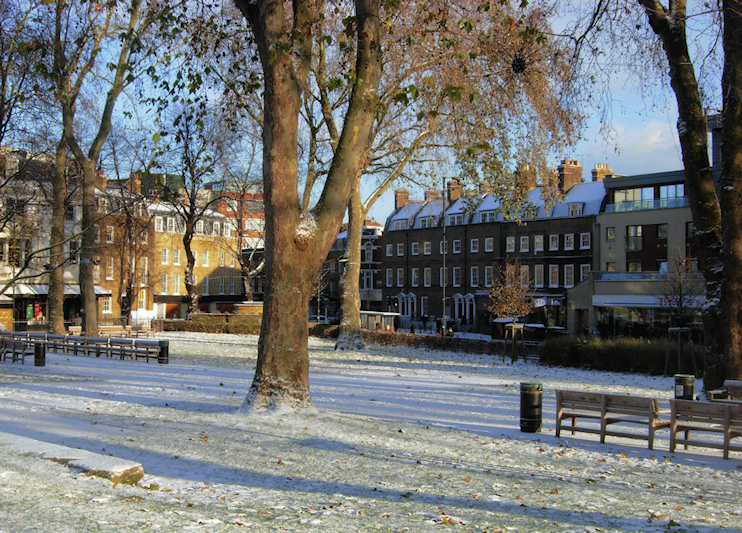 Upper Street and Lower Street (as it was) were Islington’s principal thor­ough­fares from medieval times and the triangle of land at their junction formed an early focus. Archae­o­log­ical exca­va­tions have revealed evidence of 15th-century tenements, demol­ished in the 17th century. By this time the triangle had become waste ground, espe­cially popular for dumping dung.

The Marquess of Northampton, lord of the manor of Canonbury, granted the land to the vestry in 1777 and the green was cleared and enclosed with posts and rails. A watch house was built soon after­wards and trees were planted in 1808.

Several public houses had long stood around the green, notably the Fox at the north-west corner. Sam Collins estab­lished the Lansdowne Arms in 1851 and subse­quently converted it into a music hall that gained the popular nickname ‘the chapel on the green’.

William Gladstone, then chan­cellor of the exchequer, unveiled a statue of Sir Hugh Myddelton on the green in 1862, commem­o­rating his entre­pre­neurial feat in bringing fresh water to London via the New River.

Collins’s music hall was rebuilt in 1897. Later called the Islington Hippo­drome, the building was irreparably damaged by fire in 1958. In 2009 a mixed-use devel­op­ment was built on the site with a theatre in the basement (which has never opened).

Funfairs are regularly set up on the green. The Screen on the Green is a well-estab­lished inde­pen­dent cinema, program­ming a mix of art-house and main­stream films.

Pupils from the fourth-form music class at Islington Green school sang the chorus to Pink Floyd’s ‘Another Brick in the Wall’ in 1979.

* The picture of Islington Green on this page is adapted from an original photograph, copyright Stephen McKay, at Geograph Britain and Ireland, made available under the Attribution-ShareAlike 2.0 Generic Licence. Any subsequent reuse is freely permitted under the terms of that licence.