A forgotten name for the south-eastern end of Chelsfield Village, close to the Kent countryside 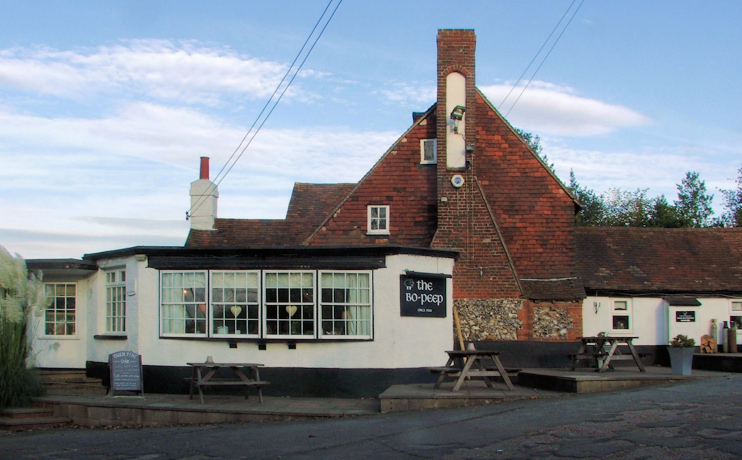 Maypole was “marked thus on the Ordnance Survey map of 1871, no doubt alluding to a site where May festiv­i­ties took place in earlier times,” says AD Mills in his Dictio­nary of London Place Names.

The 1871 map shows a handful of cottages on either side of Jubilee Road, but nothing east of Hollybush Lane, where the terraced houses of Kiln­fields were completed in the late 1950s. Several of the hamlet’s other prop­er­ties also date from post-war era, and are mostly unprepossessing.

Inter­spersed among these are a handful of older and lovelier dwellings, including Osbornes (1705), Mount Hall (late 18th century) and Maypole Cottages (late 18th to early 19th century). All these are grade II listed, as is Forkways, a probable timber-framed house refaced in the 19th century, located at the far eastern end of the hamlet, just inside the London/Kent border.

South of Maypole, on Hewitts Road, there’s a separate group of buildings collec­tively named as Bopeep on some maps. The group consists of Hewitts Farm Cottages, Bo-peep Cottages, Keepers Cottage and the Bo-Peep restau­rant and public house.

Formerly called the White Hart, the pub dates from 1548 and is said to have served as a base for wool smugglers. The oldest part of the building is faced in knapped flint, with a tiled upper floor. It seems to have been extended on at least two occasions – somewhat unsym­pa­thet­i­cally at the front. The Good Pub Guide describes the Bo-Peep as a “useful M25 country pub, [with] old low beams and enormous inglenook in carpeted bar” – perhaps implic­itly ques­tioning the merits of carpets in bars.

Maypole should not be confused with another village of the same name, north of Joyden’s Wood, which lies just outside Greater London in the borough of Dartford.

* The picture of the Bo-peep, Maypole, at the top of this page is adapted from an original photograph, copyright Chris Whippet, at Geograph Britain and Ireland, made available under the Attribution-ShareAlike 2.0 Generic Licence. Any subsequent reuse is freely permitted under the terms of that licence.