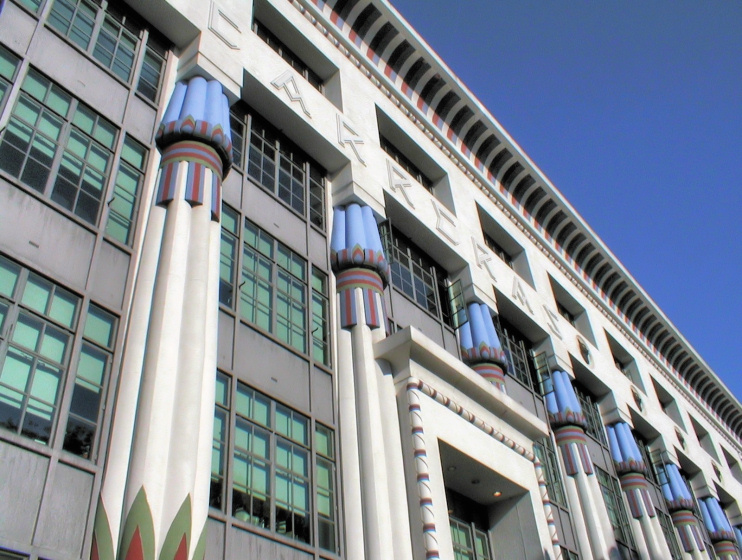 The crescent was created in the 1820s and named for the Earl of Morn­ington. A decade later the Duke of Bedford’s Figs Mead estate was laid out with stuccoed terraces and at first called Bedford New Town.

Bombing raids on the nearby railway termini caused extensive damage to the area during the Second World War. St Pancras council replaced much of the ‘new town’ with the Ampthill estate in 1960 and the council’s successor, Camden, reclad the three tower blocks in primary colours in the late 1980s.

Greater London House is an imposing office block occupying the arc of the crescent and over­looking Harrington Square Gardens. It was formerly the Carreras ‘Black Cat’ cigarette factory and its archi­tec­tural features are supposed to echo the Egyptian temple to the cat-goddess at Bubastis.

London Under­ground gained the oppro­brium of commuters in the early 1990s when its refur­bish­ment of Morn­ington Crescent tube station was halted for several years owing to a shortage of funds. The station finally reopened in 1998, winning plaudits for its sympa­thetic restoration.

Except for Cheyne Walk, few streets have rivalled Morn­ington Crescent as a creative hotbed. Among its former residents are the artists Spencer Gore, Clarkson Stanfield and Walter Sickert, who was living here when he founded the post-impres­sionist Camden Town Group in 1911. The illus­trator and political cari­ca­turist George Cruik­shank lived in Morn­ington Place. Frank Auerbach’s 1973 painting Looking towards Morn­ington Crescent Station – Night hangs in the Graves art gallery, Sheffield. The crescent has also inspired various musical artists, including the Bonzo Dog Doo Dah Band and Belle and Sebastian.

The crescent has given its name to a ‘strategy’ game played on the Radio 4 show I’m Sorry I Haven’t a Clue. Successful gameplay depends on sophis­ti­cated tactical profi­ciency as well as an ency­clopædic knowledge of London desti­na­tions. “If you’ve under­stood Morn­ington Crescent, nothing else in your life makes sense” – Jeremy Hardy.